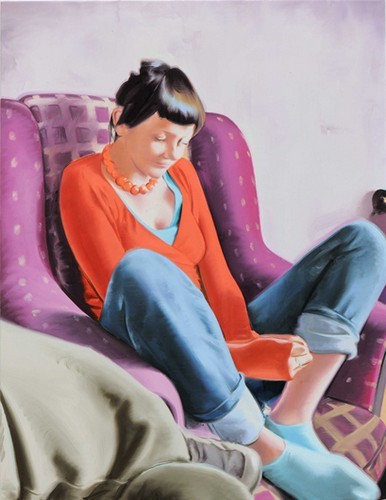 Opening in the presence of the artist on Wednesday, January 6th from 6:30pm to 8:30pm.

Galerie Thaddaeus Ropac is delighted to announce the first exhibition of works by the Polish artist Marcin Maciejowski.

For this exhibition, Maciejowski has assembled a group of works on canvas, created in 2009, dealing with the social environment of the art world and the question of his own role within it. These works capture and confront the artist's point of view on contemporary Polish society to the French bohème of the end of the 19th century. The subjects of his paintings are based on his own observations of scenes from Cracow's art world, on Polish press photographs and on fragments from Polish art history books.

With a virtuoso stroke of simplification and schematisation typical of his work, Maciejowski combines a crude flashiness reminiscent of comics with a rounded, meticulous style, almost like the Old Masters.

Maciejowski was initially inspired by a visit to the Musée d'Orsay in Paris where he was especially struck by Edouard Manet's popular paintings Olympia (1863) and Le déjeuner sur l'herbe (1862/63) which provoked him to reflect on the state of our artistic avant-garde. Maciejowski's work Manet, reinterprets a scene from Waldemar Januszczak's documentary film Manet: The Man Who Invented Modern Art, broadcast by the BBC in 2009, in which the author, standing in front of the iconic Olympia, explains the history of the work. This scene, reminded Maciejowski of his own first formative encounter with this key work in Paris. In Maciejowski's Manet (2009), he portrays the installation view of Olympia in the Musée d'Orsay, in which the vulnerable nakedness of the subject is contrasted with the hard, austere room in the museum.

In further works in this exhibition, Maciejowski adapts the iconography established by Manet, transposing it into the present day. At the Café (2009), which depicts daily life at Piekny Pies Club (Beautiful Dog Club), a favourite haunt of Cracow artists, alludes to a work with the same title by Manet, dated 1878. Similarly, Akhagori (2009) illustrates an assassination attempt on the Polish President and is reminiscent of Manet's The Execution of Emperor Maximilian (1867). In Dorota on the Deep Red Armchair (2009), Mrs. Manet is replaced by a female friend of Maciejowski's and in Z. Unilowski (2009) the Polish naturalist Zbigniew Unilowski (1909-37) is substituted for Emile Zola.

Involuntarily reminiscent of Cubist compositions, the somewhat chaotic painting of objects piled up haphazardly on top of one another in an anonymous cellar, entitled Still Life with Chair and Carpet (2009), was inspired by an eBay advertisement and raises questions about the validity of still life as a classical genre. Femme de Chambre (2009), which examines the relationship between artist and model, is based on a photograph taken in Collioure in 1910 of Henri Matisse surrounded by women. Maciejowski is apparently fascinated by the expressive aspect of Matisse's housekeeper and her qualities as a model, and ultimately focuses his final composition on her. Finally, Are you Really From the Art World? (2009) depicts an autobiographical incident through which Maciejowski considers the status and the self-image of artists in today's world. Is the artist a person outside the sphere of rules and laws? One issue amongst others that raised this question for Maciejowski is the current case concerning Roman Polanski. How did the mythical over-glorification of artists such as Manet, Matisse and Picasso come about? Are the mechanisms within the international "art world" still the same? In this context, Maciejowski associates the art world with a country, a quasi-geographical place. In the question of whether someone comes from the "art world", it makes rhetorically no difference if a place-name is substituted for "art world".

Marcin Maciejowski was born in Babice, near Cracow, in 1974. Between 1994 and 1996 he studied Architecture at the Polytechnic Academy in Cracow before moving to the Cracow Academy of Art to study Graphic Arts until 2001. Together with Rafal Bujnowski, Marek Firek, Wilhelm Sasnal and Josef Tomczyk, he founded the Grupa Ladnie (Pretty Group), which negates the myth of the artist as a creative genius and highlights the power of art to effect social change. Since the early 2000s, Maciejowski's work has been exhibited internationally, and is represented in important collections including the Essl Museum and the Volpinum Collection of Contemporary Art in Vienna, the Bunkier Sztuki Gallery for Contemporary Art in Cracow, and the Los Angeles County Museum (LACMA).

From March 2010, the Cracow National Museum will hold a comprehensive solo exhibition of Marcin Maciejowski's work.