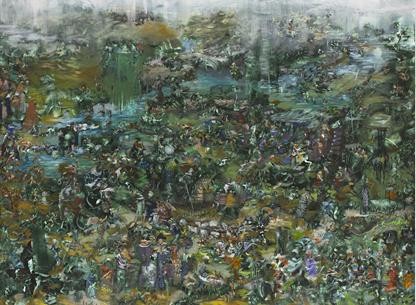 Galerie Thaddaeus Ropac is pleased to announce the upcoming group exhibition that will bring together works by seventeen Iranian born artists, some of whom are working abroad. Raad o Bargh (literally meaning "thunder and lightning") presents an overview of the rich practices, expressed across different media in a poetic, pop, political, humorous or satirical manner, showing that there is a varied and non-homogenous trend among current Iranian artists.

Avish Khebrehzadeh makes delicate drawings, with a dream-like quality as well as paintings onto which she projects hand-drawn animations. On view, Falling Horse in Battle (2008) is a synchronized video animation projected onto a diptych painting. Whilst immersing us in a folkloric universe, the artist addresses issues such as human vulnerability, alienation, melancholy and sentimentality, often expressed through the relationship between man and animals or man and his environment. Similarly working in different media, Laleh Khorramian often uses the monoprint technique to depict abstract and picturesque landscapes, which stem from recurrent dreams and childhood memories and assign a magical and theatre-like quality to her work.

Working in a very personal realm, Ala Dehghan will exhibit a series of small drawings documenting her everyday experience of the things that affect her mind and her life. Maryam Amini's sensual drawings depict a universe in which eroticism and femininity coexist with an underlying menace, rendered in a soft and buoyant manner and punctuated by vibrant colours. Behrouz Rae uses both drawings and photographs to articulate autobiographical intimacies. Bimester (In Bimester we Trust) focuses on the subjects of psychological dissociation and the alter ego. Rae uses his art as a means of self-emancipation, of therapeutic release, through which he can express the trauma of a turbulent childhood, of living with autism and anorexia.

Y.Z. Kami's interest manifests itself primarily in the field of portraiture and the relationship between the individual's spiritual journey and the physical self. His portraits in oil are executed on a monumental scale in low-key tones. Despite their size his subjects are paradoxical in their contemplative state. His philosophical inclination is emphasised by the transcendental nature of these portraits, which appear to go beyond an attempt to capture he sitter's likeness, towards studying the fundamental nature of human existence. His prayer spirals configured in concentric circles are symbolic of the allegedly cleansing whirling action of the dervishes who prescribe to Sufism.

Ali Banisadr emphasises the impact photography can have on the recollection of events. He prefers to avoid the medium, as it potentially limits the possibility of an all-inclusive sensorial account and instead paints his own fleeting childhood experiences of the Iraq war to encompass sounds and smells. He makes references to Persian miniature painting combined with stylistic features inspired by occidental art. Rokni Haerizadeh has an amazing ability to submerge himself in the past; in memory, literature and tradition whilst being informed by modern pop culture. His upbringing in the Islamic Republic has led him to continually reassess his environment resulting in work that largely articulates social dissatisfaction amongst Iranians. Rokni Haerizadeh refers back to Persian History and literature to find material that he uses allegorically, making comparisons to the contemporary world. He will be showing an illustrative painting, the narrative for a poem by Ahmad Shamlou, a contemporary Iranian poet.

Farhad Moshiri has developed a pop work of art that is at once ironic, provocative and humorous, often embedded with cynicism and sarcasm. He incorporates embroidery and found materials to his paintings and installation works, that are often inspired by the ornamental, the decorative, the bazaar and that play with ideas of marketing and commodification.
Working in the footsteps of Pop Art and Dadaism, Vahid Sharifian has coined his art "Papa'ism", which is to be read as a critic of both movements. Even so, he plays with their language to create quirky works, such as his new series of small sculptures Last Part that will be hung on the walls, suspended to the ceiling and placed on pedestals.

Shirin Aliabadi who is most known for her photographs of young veiled girls in cars and her Miss Hybrid series - depicting young Iranian chador-clad women adopting a trendy look with bleached blond hear, colored contact lenses, make-up and surgical nose tape - will be exhibiting a new body of work entitled, Eyes Only. In the same vein as the Miss Hybrid series, Aliabadi's new body of work on paper similarly shows how Iranian women subvert the confines of the conservative Islamic rules by adopting western codes of beauty. Often working with manipulated digital photographs and collage, Ramin Haerizadeh creates a world of contradictions and absurdities. In his recent series of collage, Today's Woman, composed of found images and self-portraits, the artist casts a burlesque satirical look on the current political and social situation in Iran.

Bita Fayyazi will be showing an autobiographical installation piece entitled Goli's Dowry; a collection of seven traditionally crafted interlocking wooden chests, with the exception of the smallest trunk, which contains a plaster penis infested with ceramic cockroaches. The chests are covered in silkscreen pictures of events that have had a profound influence on the artist's life. Another of the chests holds a diary chronicling forty years of Goli's married life.
Using found materials to assemble her life-size sculptures, Shirin Fakhim's Tehran Prostitutes are grotesque, humorous and disturbing. They are a commentary on the hypocrisy surrounding the world's oldest profession in a profoundly moralistic country, in which women are driven to prostitution as a result of escalating poverty and domestic abuse.

Ghazel is a performance and video artist, most known for her short sequences of "self-portrait" videos entitled Me. Since 1997 she has accumulated almost 700 scenes that show her doing simple everyday tasks or activities, such as sunbathing, waterskiing or smoking a cigarette, while dressed head to toe in a black chador. At once funny and absurd, they deal with important issues of identity, exile and integration. Her latest performance of this series will be shown as an animated framed painting, again featuring the artist. Equally using homemade documentary-like short videos as a mode of expression, Shahab Fotouhi's black and white video Direct Negotiation (2007) shows a cat tapping its paws on a closed windowpane, apparently trying to get the attention of whoever inhabits the dark room. It is both amusing and discouraging, and the title potentially alludes to Iran's (the cat) difficulty in talking with the international community and vice versa. In the installation Tulips Rise from the Blood of the Nation's Youth (2008), Mahmoud Bakhshi Moakhar addresses history by symbolically representing the martyrs of the Iranian Revolution as red neon tulips (which is also the crescent form in the centre of the current Iranian flag). They can be switched on and off by visitors, thus rendering a dramatic work playful through its interactivity.
www.ropac.net