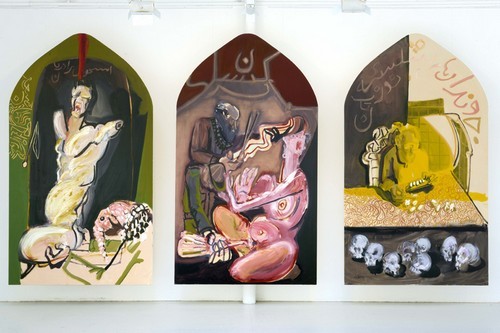 Opening in the presence of the artists on Saturday, June 5th from 6pm to 8:30pm.

I saw the best minds of my generation destroyed by madness, starving
hysterical naked, ...
angelheaded hipsters burning for the ancient heavenly connection to the
starry dynamo in the machinery of night, ...
who created great suicidal dramas on the apartment cliff-banks of the Hudson under the wartime blue floodlight of the moon & their heads shall
be crowned with laurel in oblivion, ... - Howl, Part I, by Allen Ginsberg

Galerie Thaddaeus Ropac is delighted to announce the upcoming exhibition of works by Iranian artists Rokni and Ramin Haerizadeh and Bita Fayyazi.

The title of the exhibition Be Crowned with Laurel in Oblivion, chosen by the three artists, comes from a 1956 poem by Allen Ginsberg, Howl. The poem, one of the seminal works of the Beat Generation, presents a version of the American Dream gone wrong, wonderful young minds with endless opportunities becoming overwhelmed and self-destructing because of the mainstream "machine". The Haerizadeh brothers and Bita Fayyazi transpose the anger embedded in this prose into the concealed reality of daily life in the disjointed state of Iran.

The works of Rokni and Ramin Haerizadeh are linked by several unifying elements. These include an underlying irony, the creation of phantasmagorical worlds, and the spirit to highlight controversial aspects of the Iranian regime. These attributes have made Rokni and Ramin, known both individually and together, two of the most engaging and exciting artists of Iranian art.

Younger brother Rokni Haerizadeh makes it easy to become caught up in an exaggerated almost dreamlike world with his use of vibrant colours and often the sheer size of his paintings. These representations however are strangely realistic in their depictions of daily life in the Islamic Republic of Iran and it is the nuances of each piece that truly underline his views.

In this exhibition especially, he conveys discord. For example in Oh Victory, you forgot to wear you underwear (Neda), we see cars alight and a hoard of protesters in the street, and in the 15 panel installation, The Pieces Required in Constructing the Whip of a Foe: 1. Your Sister's Hair 2. Your Brother's Bone 3. Your Father's Broken Tooth , he especially highlights hypocrisy saying himself: "Why should the punishments in an Islamic regime be of such sexual nature? This is against all human codes and Islamic precepts"

This installation will be on display 5 minutes from the gallery at the Espace Commines, 17 rue de Commines, from 3-6 June (11am to 6pm)

Rokni will also be displaying several works on paper, which he has created by taking snapshots mainly of media footage and altering them by painting over the top. The overall effect is a forcefully ironic view of the current affairs of Iran.

Ramin Haerizadeh, like his brother, unashamedly conveys his point of view capturing the state of Iran since the revolution. He mainly works with photography, cutting up images and rearranging them, creating a world of contradictions and absurdities in which he replaces the faces of his characters with his own. In doing this he seems to question whether reality is the same as appearance.

In the works from his most recent series, We choose to go to the Moon , we see Ramin's face in different situations sometimes frustrated and angry, mocking the strictly controlling regime of Iran. In some of the works, the artist includes images of Mahammad Mosaddegh, former Prime Minister of Iran (1950s), known as a secular ruler and hero of anti-imperialism, who pushed forward the nationalization of the Iranian oil industry. Mosaddegh is still regarded today as a national hero, because of his democratic principles and defense of the Iranian people.

As in much of her work, Bita Fayyazi will be showing a series of new bronze sculptures that have a strong narrative often related to her childhood memories or experiences. In the gallery's Project Space, Fayyazi will display seven sculptures - including The Demon Came to Quench his Thirst, but Stumbled into the Pond and Pestle & Mortar I and II - some of which will be cast at the Coubertin Foundry in the outskirts of Paris. All of the works address human characteristics such as vulnerability, seduction, abuse, superstition, defiance and surrender.

Rokni (b. 1978) and Ramin (b. 1975) Haerizadeh and Bita Fayyazi (b. 1962) were all three born in Tehran, Iran. Their shared upbringing in Tehran may be the reason that much of their inspirations are similar and this shared point of view serves to reinforce their already powerful work. The Haerizadeh brothers have recently exhibited at the Saatchi Gallery in London (2009) and Bita Fayyazi showed her work at the Espace Louis Vuitton in Paris in 2008. All three participated in Raad o Bargh, the group show held at the gallery in Paris in February 2009.
www.ropac.net