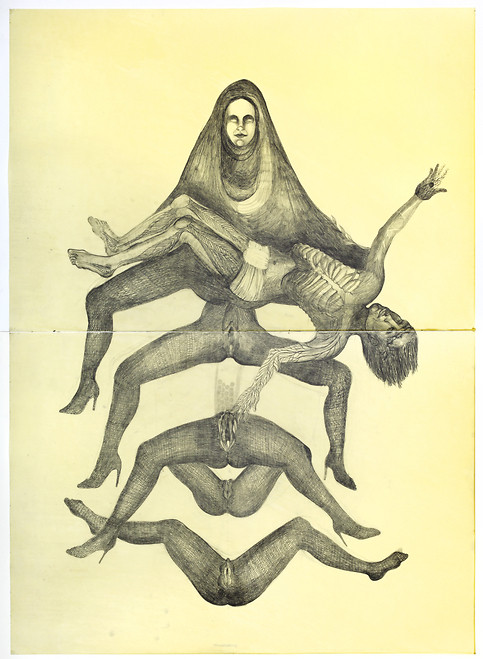 Galerie Thaddaeus Ropac is delighted to announce the third exhibition of work by Chilean artist Sandra Vásquez de la Horra, who lives and works in Berlin.

In this exhibition, Origenes, Sandra Vásquez pursues her thinking on a series of drawings begun in 1997 evoking the way the body taking shape in the mother's womb is a parallel with the creative act of the artist engaged in drawing.

A notable development in her thinking here is expressed through the recurrent presence of elements from the vegetable kingdom that enrich the notion of the life cycle. It forges a link with an earlier series called 'The Botany of Evolution'. In this dialectic of life and art, a grain of cereal corresponds to the soul in the same way that the work of art begins gestation in the very first stroke of the pencil. The unknown factor is the form that either life or the completed work of art will take. In this respect, Sandra Vásquez's previous works left a great deal of scope for development, for coming back to line and pattern, so that the very process of the creative act could be expressed as an accomplished, autonomous form. Although myths, popular culture, motherhood, and spirituality are still the basic elements of Sandra Vásquez's vocabulary, this new series of works seems to express a new maturity in the treatment of these themes.

Sandra Vásquez returns to the genesis of the creative act, comparing it to the formation and development of the spirit. The drawing entitled Origenes (2013) appears to be a religious piéta but the reference is in fact to the birth of man as energy and creative force. The god the woman has given birth to is the god of creation and ultimate submission of body to soul. He is both birth and death incarnate. The skeleton of the man with his veins showing is a visual metaphor for the flow of sap through the branches and leaves of a tree. Birth and death in the vegetable kingdom place the experience of the body and the cyclical renewal of life in perspective, making death not absence of life but an essential stage of it. The drawing, La Virgen del Amazonas (2013), of the breast-feeding mother is, in this respect, as poetic as it is explicit; the woman's body is a screen bearing the image of rich and generous flora, like the breast that feeds the newborn child.

The expression of life in the form of cycles is a recurrent aspect of this new series. Las Flores del Mal (2013) is a drawing that expresses this vegetable and human parallel as an obvious fact, while at the same time having recourse to irony and elegance combined with a visual and literary richness typical of Sandra Vásquez's work. 'The Metamorphoses of the Vampire' is one of the poems in Baudelaire's Fleurs du Mal. It confronts the sexual act, seeing it as a sensual finality in which one of the protagonists – the woman – is revealed as a vampire in a certain state of decomposition; a manifestation of death in the midst of the sexual act, which itself is a celebration of existence.

Sandra Vásquez de la Horra, was born in 1967 in Viña del Mar, Chile. She lives and works in Berlin. After graduating from the School of Graphic Arts at the University of Viña del Mar in 1994, she went on to study at the Düsseldorf Kunstakademie. In 2003 she obtained a Master's degree at the Cologne Kunsthochschule für Medien. Drawings by Sandra Vásquez de la Horra have recently been exhibited at the Sao Paolo Biennale, at various solo shows, the Musée d'Art Moderne in Saint-Etienne, the Oldenburger Kunstverein, the Museum Morsbroich, Busan Museum of Art in Korea, the Maison Rouge in Paris, and the Pompidou Centre, which acquired works by her after she was awarded the Daniel & Florence Guerlain Foundation prize for drawing in 2009. Her works feature in museum collections in Germany, Switzerland and France, and in many private collections and foundations, particularly those devoted to drawing.
www.ropac.net