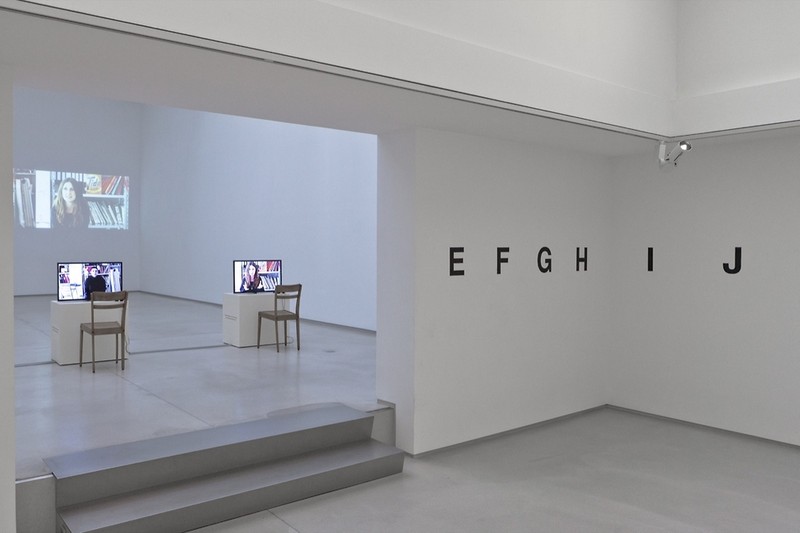 Galerie Thaddaeus Ropac is pleased to present Sturtevant’s video installation "l’Abécédaire de Deleuze." The installation is derived to bring into being the higher power of words and the tight formal format is to focus on space as related to content. Three chairs will be equally spaced facing the far wall of the gallery space, with three monitors placed directly in front of the chairs: giving a close view of the participants who are critics, museum directors, writers and “thinkers” of the art world. At the same time, a still image of the subjects will be projected large scale on the facing wall. Thus throwing cybernetics and its sidekick digital to blatantly display its trickster action of reversing hierarchies with its disastrous entrenched mental sets; reversing distance from distance to place. In the upstairs gallery space and without relation to this major installation, Sturtevant will present black and white photographs of her Dillinger Running series. Sturtevant lives and works in Paris. In 2011, she was awarded the Golden Lion for Lifetime Achievement at the 54th Venice Biennial. She has received the Kurt Schwitters prize from the Sprengel Museum Hannover, which will show House of Horror in the fall of 2013. On October 13, 2012 Frieze Art Fair will host a conversation between Sturtevant and John Waters in London. Sturtevant’s exhibition at the Moderna Museet in Stockholm Image over Image will travel to the Kunsthalle Zurich (opening Friday 16th of November 2012).
www.ropac.net