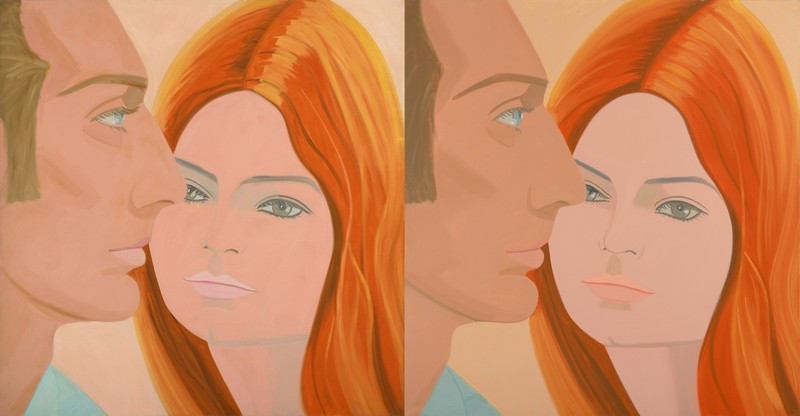 From 25 July, the main exhibition of the "American Summer" in the Galerie Thaddaeus Ropac will be Alex Katz 45 Years Of Portraits 1969-2014, in the Villa Kast.

This solo exhibition comprises historical paintings from the 1960s and '70s, as well as more recent works dating from the 1980s up to the present day. These include large-scale pictures and intimate, cursory sketches, as well as Katz's less well-known Cut-Outs, painted on thin metal sheets so that they look like autonomous silhouettes detached from the composition.

The theme is the figure, interpreted both as outline and as form or line. A considerable proportion of Katz's work is concerned with portrait and reproduction or representation of the body. "His self-portraits are like confessions of faith. On the one hand, they stand in the tradition linking Rembrandt with Bonnard, and on the other they satirise these" (Adrien Goetz, 2014).

Katz's motifs, inspired by alternating male and female models, concentrate on friends and family. Over the years, he returns repeatedly to his favourite models, like a mechanical reproduction. He even multiplies the individual person, for instance juxtaposing the double portrait Laure and Alain, painted in 1964, with another one from 1991. The two pictures are identical in composition and persons portrayed. Katz's urge to repeat pictures identically offers an insight into the development of his painting over an extended period.

The exhibition Alex Katz 45 Years Of Portraits 1969-2014 invites the viewer to look at the artist in relation to the European tradition. "Katz is a museum artist: he helps us to see the artists whose work is already hanging in museums. He has taken a look at them, and we understand them through his work – and not only the artists of the two generations that worked parallel with him. There have already been endless discussions as to how Katz relates to Pollock, Rothko, Lichtenstein and the like. Perhaps it is now time to consider him in relation to Manet, Degas and Ingres" (Adrien Goetz, 2014).

Alex Katz, born in 1927, lives and works in New York. He has always regarded himself as walking the line between abstraction and realism. He was painting figuratively and in American billboard formats at a time when American art as a whole had turned away from representationalism. Since the 1980s, Alex Katz has been the outstanding representative of Cool Painting. Long before the protagonists of Pop Art, such as Andy Warhol, Katz adopted the principle of seriality, thus influencing an entire generation.

The exhibition Alex Katz 45 Years Of Portraits 1969-2014 is accompanied by a catalogue with texts by Adrien Goetz and Suzy Menkes. Concurrently with the Salzburg retrospective, Alex Katz exhibitions are to be held in the Albertina in Vienna and Tate Modern in London, from their own collections.
www.ropac.net