An Inner Dialogue - The Contemporary Self-Portrait 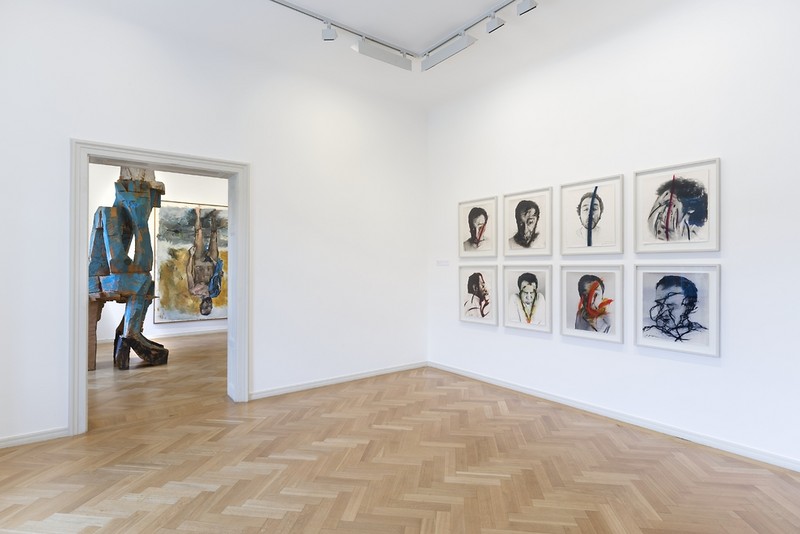 Self-portraits have always exerted a tremendous fascination, since they allow the viewer direct confrontation with great artists. Although the genre of the self-portrait dates back 4,000 years, it was not until the Renaissance, when creative workers began to see themselves as artists rather than artisans, that it became an established part of a painter's œuvre – and it has remained so.

We take pleasure in announcing a comprehensive group exhibition of contemporary self-portraits, with contributions from some 20 artists of different generations. The show is an attempt at a survey of the genre, with over seventy works dating from between 1961 and 2013 combining to form a vivid, multi-faceted picture of contemporary artistic self-portraiture.

The history of the self-portrait may be divided by theme, assigned to specific periods: in the ancient world and the Middle Ages, there was no physiognomic image, which was later considered a prerequisite, and which finally, in the Modern Age, was abandoned and deconstructed. In early religious, mythological or historical works, the face of the artist appears as a figure in the crowd, a kind of pictorial signature. Moral qualities, social status, artistic legitimation, autobiographical elements as well as the most diverse emotional states are depicted as important concerns of the painter. Female artists, who had to struggle for recognition by society, have been present since the 16th and 17th centuries.

In order to emphasise their own skill, artists would depict themselves painting at the easel. The mirror was used as an instrument both for self-examination and as a element of composition. Italian critic Omar Calabrese wrote that the historical development of these categories reveals abstract basic ideas at the centre of artists' self- examination: identity, evidence of authorship, symbol of a role or an ideal, technical mastery.

Our exhibition begins with a vitrine by Joseph Beuys, containing two of the five legendary bronze heads made by Beuys in 1961; these were first shown in 1976 in the context of his installation Tram Stop at the Venice Biennale, and last in his 1985 installation Palazzo regale, interpreted as a royal tomb. Anacharsis Cloots (1755-94) had always (like James Joyce/Ulysses and Iphigenia) served as important models for Beuys, who made the head as a homage to the humanist and revolutionary who termed himself orateur du genre humain. We are also showing works created by Joseph Beuys in the context of the legendary performance Titus Andronicus/Iphigenia (1969).

The late 1960s and early '70s are represented with works by Anselm Kiefer, Valie Export, Arnulf Rainer and Dieter Roth. Kiefer shows works associated with his legendary books Heroic Symbols and To Genet, which at the time were systematically misunderstood in Germany.

These works show the artist in a vast desert region, giving the Nazi salute, which degenerates into a grotesque, meaningless relic of a past age, the wide, empty landscape serving merely as a projection screen. In addition, photographic works by Valie Export and overpaintings by Arnulf Rainer and Dieter Roth illustrate how one's own body can become artistic material. As art historian Monika Wagner put it: the artist's body itself replaced the body of the picture as the ground for artistic expression.

In this connection, collaborations by Arnulf Rainer and Dieter Roth play a significant role. The two artists called their joint works "mixing and separating", according to whether they worked four-handed on the same motif (mixing) or first divided the ground for a kind of contest in finding different interpretations of the same idea (separating). All these works are characterised by an exuberant humour which, free of self-censorship and the usual inhibitions affecting an artist's career, emboldened both Rainer and Roth to tread new territory. In this collaboration, Rainer in particular appears in a new, unexpected light; comedy of situation, wit and light-hearted elements emerge as characteristics which in the ensuing years were to become significant also in his individual work. The works shown in Salzburg were first exhibited between 2006 and 2009 in the Deichtorhallen/Hamburg, Sala Alcala/Madrid and Belvedere/Vienna.

A 1990s work by the duo Gilbert & George offers a British variant of performative self-presentation of one's own body as a Living Sculpture.

We also include a work by Anselm Kiefer, incorporating various materials and based on the iconography of the Pietà, and a canvas with historical woodcuts referring to the assertion of the Portuguese seafarer Vasco da Gama (1469-1524) I hold all Indias in my Hand, and showing the artist floating between the continents and sciences.

The 1980s and early '90s are represented with works by Robert Mapplethorpe and Alex Katz: Mapplethorpe photographed himself dressed as a 1920s Hollywood diva, while Katz, father of Pop Art, portrayed himself – in his inimitable style which combines the painting tradition of American modernism with the two-dimensionality of poster aesthetics – as a swimmer wearing an ordinary T-shirt.

Ilya Kabakov's contribution to the exhibition is a conceptual self-portrait dating from 1998, one of the so-called Rosenthal works. A mixture of installation and panel painting, this is a classical genre painting in the style of Russian Cézannism, executed on a wooden box containing an electric light bulb which is visible through a gap in the right-hand quarter of the box. One might expect something more complex, on a larger scale, but finds instead a simple construction. Emilia Kabakov wrote in a recent e-mail about this work: "Done by a fictional character [Rosenthal], the work gives Ilya the possibility to hide from critics, to be able to look at his own idea and work from the position of the outsider: Is this artist right? Wrong? How does it work? Thatʼs an interesting and complicated situation and very conceptual."

Works created for the exhibition by the Polish painter Marcin Maciejowski and the Berlin artist Marc Brandenburg will be presented here for the first time. In his typical virtuosic simplification and schematisation, Maciejowski combines a bold, direct style sometimes reminiscent of the comic strip, with a gentler, meticulous style, pastose in places, almost like the Old Masters. Everyday scenes from the art world of Cracow are juxtaposed with attitudes taken from art history, which Maciejowski, with an admiring eye, tries to render in painting. Brandenburg's spectrally delicate pencil sketches seem at first glance like negatives of snapshots from a bizarre parallel world. His photographically realistic scenes have an unsettlingly menacing effect – as does the self-portrait shown here, which is based on a photograph taken for a fashion magazine. Daniel Richter and Erwin Wurm have also contributed self-portraits to the exhibition.

A combination of myth, politics and autobiography is a leitmotif in the work of the Chinese artist Yan-Pei Ming, who has lived in France since 1980. Here a monumental watercolour, in Yan-Pei Ming's typical tonal style of painting, has supplied the motif for the invitation card. Galerie Thaddaeus Ropac held a first exhibition by this artist last winter, in a solo exhibition in Paris, and now introduces him to Salzburg.
www.ropac.net