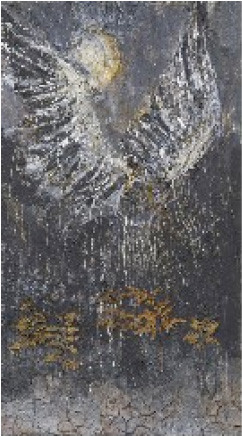 We are pleased to present a new cycle of works by Anselm Kiefer that deals with the biblical figure of the Virgin Mary in an extensive solo exhibition in Salzburg. The title Maria durch ein Dornwald ging [Maria walks amid the Thorn], a German Advent and Christmas carol that has been popular for around a century, refers to a total of roughly thirty pictures and one sculpture, most of which were made in 2007/08. Some of the exhibited works were started in the nineteen-seventies and completed over the past months with the sedimenting working method that is so typical for Kiefer.
After the iconography of the divine was the focus of attention in our 2003 exhibition Am Anfang [In the Beginning], which mainly dealt with cabbalistic mythology and myths about the origin of the world, the aesthetics of the works by Kiefer presented at our second solo exhibition in the year 2005 were of a more worldly character: that cycle linked references to Germanic mythology to the lyrics of the Germanwriting Jewish-Bukowinian poet Paul Celan.
The latest block of works is focused on the Christian religion, which Anselm Kiefer has been working on as an artist for many years. Here, landscapes and lakes become dramatic sites of mythological scenes: the assumption of the blessed Virgin Mary, the descent of Mary on the third day, the birth of Virgin Mary and the Holy House of Loreto, the invocation of the Virgin Mary through the Litany of Loreto and the Hail Mary prayer, and the appearance of God in the burning bush. But they also become sites of Mariological discourse, such as that between the so-called Maculists and Immaculists on the question of Immaculate Conception, which led to the dogma proclaimed by Pius IX in 1854.
»What greatly interests me about the Virgin Mary today, apart from the biographical formation, are the dogmas. There are five Virgin Mary dogmas. The last one was proclaimed in 1950, the Assumption of the Virgin Mary into heaven with her body and soul. The dogma of the virgin birth of Jesus and the Immaculate Conception originates from the nineteenth century, when people already knew how children are conceived. I always thought it audacious of the Catholic Church to proclaim such a dogma.
It is such a challenge to common sense. Making an assertion that is completely untenable is somewhat artistic.
The absolute power that can be experienced by an artist at work must be seen parallel to the Church that claims Mary was a virgin three times, prior to the visitation, while, and after giving birth. That has always fascinated me. I would almost call it a kind of Dadaism. It's crazy, it's really crazy« (Anselm Kiefer, 2008).
This exhibition also places the viewer into what Daniel Arasse aptly calls the typical "Kieferian labyrinth&". In the new cycle, the elements "painter's palette", "wings", "stones", and "flames", which have always been recurrent in Kiefer's picture world, become symbols of a very personally and autobiographically conceived understanding of Catholicism. In earlier works, the winged palette was often used to comment on the heroisation of art in totalitarian systems or to mark art as an endangered good that is worth protecting, whereas it now becomes a vehicle of Christian-mythological ideas. Here, the flames rather call to mind an epiphany than scorched earth, while the stones resemble animate, but silent witnesses of religious scenes. »For thirty years, the oeuvre of Anselm
Kiefer has been developing in a process of sedimentation, crossing, and reworking of themes, motifs, and constellations that keep appearing in very different media and overlap in them [...]. The more one becomes familiar with his work and the better one knows it, the more one gets the feeling of dealing with a kind of labyrinth that gradually grows in size and complexity [...]« (Daniel Arasse 2001).
A catalogue including an interview with Anselm Kiefer by Klaus Dermutz will accompany the exhibition.
www.ropac.net