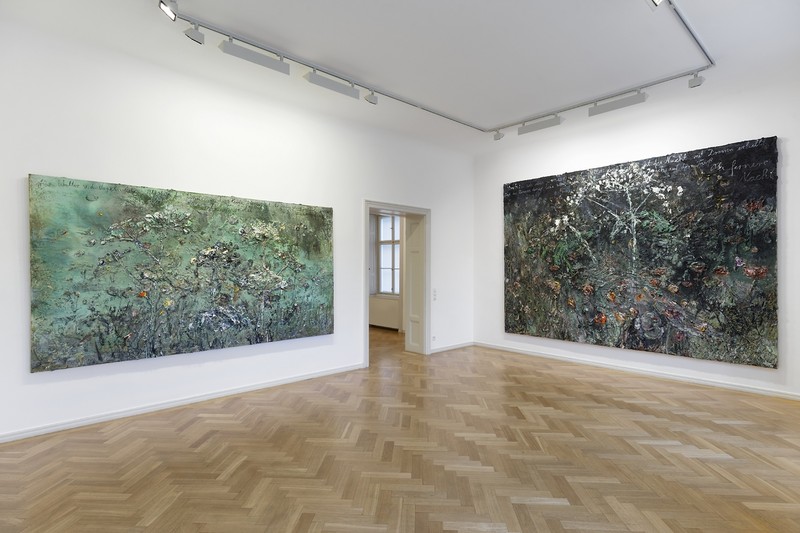 It’s all the same. Escape from what exists,

Into the boundless realm where all Form lies!

Strain with all your being: downward.

Galerie Thaddaeus Ropac is delighted to host a major exhibition of new works by Anselm Kiefer at the gallery in Salzburg. Under the title Im Gewitter der Rosen [In the storm of roses], Kiefer has assembled a series of canvases, overpainted collages, watercolours and sculptures sharing the thematic dialectic of war and peace, love and pain, beauty and destruction. These leitmotifs draw primarily on three literary sources: Ingeborg Bachmann's (1926-73) poem In the Storm of Roses (1953), the mediaeval love poem Under der Linden [Under the lime-tree] by Walther von der Vogelweide (c.1170-c.1230), and Arthur Rimbaud's (1854-91) early sonnet Le Dormeur du val [The sleeper in the valley] (1870). It is not only the analytical reflection on the functions and iconographies of different myths, be they Christian, cabalistic or Germanic, with which Kiefer was concerned in recent years, but also literary motifs which he related to one another in texts from different centuries.

»I think in pictures. Poems help me with this. They are like buoys in the sea. I swim to them, from one to the other. In between, without them, I am lost. They are the handholds where something masses together in the infinite expanse. Sometimes the ruins of things past condense into new words and contexts«, said Anselm Kiefer in his acceptance speech at the award ceremony of the peace prize of the German book trade in the Frankfurt Pauluskirche in 2008.

No-one, after 1945, made the question of war and peace more unreservedly the focus of their writing. Ingeborg Bachmann placed herself at the mercy of the destructive experiences of her time, and countered the continuing state of war in the world with her own utopia of a fulfilled life. In the Storm of Roses, written in a hermetic style comparable to that of Paul Celan's poetry, introduces an image around which all further metaphors are grouped. Night and thunder belong to the storm; related to roses are thorns, leaves, and bushes, which also symbolise the clouds. The dynamic suggested semantically by the storm is formally reflected in the opposing pairs. The formal asymmetry leaves behind a feeling of undirected motion.

Similarly the depiction of plants, stems, clouds against dark, almost black fields in Anselm Kiefer's canvases, which take up the motifs and the dialectic of the poem. The elements seem as though whirled around by a storm. Kiefer's new series evinces an increasingly painterly style, although for these new works – in which the artist's typical material aesthetic of sedimentary structures applied layer by layer predominates – no brush was ever used. Sometimes the paint is flung on to the canvas, producing elements reminiscent of the Drippings of European Informel and American Expressionism.

Walter von der Vogelweide's Middle High German song Under der Linden, which belongs to the so-called Mädchenlieder, tells of the experience of a simple maid and her courtly lover. The poem's bed of flowers and the broken flowers and blades of grass fit perfectly into the iconographic sphere of (broken) stems, flowers and ears of corn which Anselm Kiefer has used increasingly since his work on the series Für Paul Celan, Die Ungeborenen and Morgenthau Plan.

In Arthur Rimbaud's poem Le Dormeur du val, which he wrote at the age of sixteen, under the shadow of the Franco-Prussian war, a man lying in the grass is also the principal motif: here the sleeper is a young soldier, shot dead by German troops. This early work is a favourite among Rimbaud's poems published in anthologies and schoolbooks.

The monumental sculpture entitled steigend steigend sinke nieder [rise rise descend] (2011), which will be placed in the garden of the gallery, distorts the vegetal motif of the (broken) stem: here, Kiefer hangs showers of long-stemmed sunflowers from the top of a display-case sculpture, taking a motif from Johann Wolfgang Goethe's Faust II: in Act I, Faust must descend to the mothers in order to summon Helena. This realm of the mothers is a sphere of the amorphously unreal, the void. Goethe describes this descent at the same time as an ascent – similar to the cabalistic motif of ascent and descent to the seven heavenly palaces.

The sphere of the mothers is also referred to in the sculpture Regina Coeli (2010) – an honorary title for the Virgin Mary, the queen of heaven. Here, the firmament with its stars is symbolised by a historic model of the planets, set upon the shoulders of this woman of antiquity. The connection between macro- and microscopic structures – a theme which Anselm Kiefer has explored for many years, inspired not least by the philosophy Robert Flood(1574-1637) – permeates the Salzburg exhibition like a leitmotif: the stems, ears, feathers, flowers and bushes juxtaposed with heavenly spheres, subterranean palaces, natural forces and broad horizons.

The exhibition will be accompanied by a publication with a text by Orhan Pamuk.
www.ropac.net