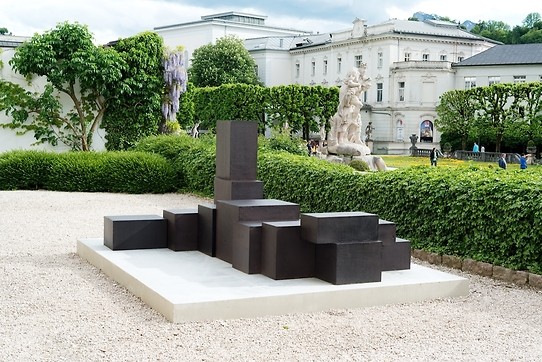 For almost 40 years, Antony Gormley has been creating sculptures exploring the relation of the human body to space. In the past two years, the projects attracting most attention have been Horizon Field, in the Vorarlberg Alps, and the installation Horizon Field Hamburg, realised in co-operation with the Galerie Thaddaeus Ropac in the Hamburg Deichtorhallen. Horizon Field consisted of 100 life-size bodyforms cast in solid iron distributed over an area of 150 km2, at 2,039 metres above sea level creating a horizontal plane through the valleys of Lech, Zurs and Zug, and Horizon Field Hamburg invited 100 viewers at a time to venture onto a 1,250m2 black- reflecting platform suspended 7.5 metres above the ground. The hovering structure swayed in response to their movement. Horizon Field Hamburg exploited the structural potential of the century-old building, re-orienting viewers in a new spatio-temporal context. Galerie Thaddaeus Ropac in Salzburg is now showing the latest phase in Antony Gormley's exploration of space. In the exhibition METER, in the Villa Kast in Salzburg, Gormley explores scale and the relativity of any measurement, encouraging viewers to experience anew their own physical presence in space.

The sculptures displayed on the ground floor of the gallery are larger than life; those on the first floor smaller than life. Gormley addresses size in two ways: first, with proportional magnification and second, with increasing expansion.

The austere, totem-like figure Ward (2013), 1.5 times life-size, occupies the entrance to the gallery; it is one of a series of proportionally magnified figures positioned along the architectural axes of the ground floor. All the sculptures in the exhibition use the formal language of architecture, inviting greater awareness of spatial context in the viewer through the various ways in which they occupy the rooms in the gallery.

These works are contrasted by sculptures from the ‘Tankers’ group. These, too, are abstracted bodyforms, with rectilinear volumes expanding from human dimensions. Consisting of dark Corten steel plates, they enclose a space the extent of which is based on the principles of the metric expansion of the universe. Here, an observation method used in astronomy is applied to the intimate sphere of the human body.

In counterpoint to the ‘Tankers’ is a series of white plaster sculptures characterised by stacking, propping and cantilver, exploiting the interplay between stability and instability.

Three sculptures made of linear stainless-steel, including the work Course (2010), a slender, double life-size figure, interpret the human body as an energy system.

The massive 11 ton iron figure Rest IV (2013), in a classic reclining posture, is displayed in the garden of the Villa Kast.

Antony Gormley was born in London in 1950. Countless solo exhibitions since the 1980s have been devoted to his work, in venues such as the Hermitage, St. Petersburg (2011/12), Kunsthaus, Bregenz (2009), Hayward Gallery, London (2007), Tate Britain, London (2004/05), Malmö Museum of Art (2001), Kunsthalle, Kiel (1997) and Louisiana Museum of Modern Art (1989). Major works in public space include the Angel of the North (Gateshead, England), Another Place (Crosby Beach, England) and Exposure (Lelystad, Netherlands). Gormley has received many distinctions, including the Turner Prize (1994) and the Order of the British Empire (1997). He is an honorary member of the Royal Academy of Arts, and since 2007 a trustee of the British Museum.
www.ropac.net