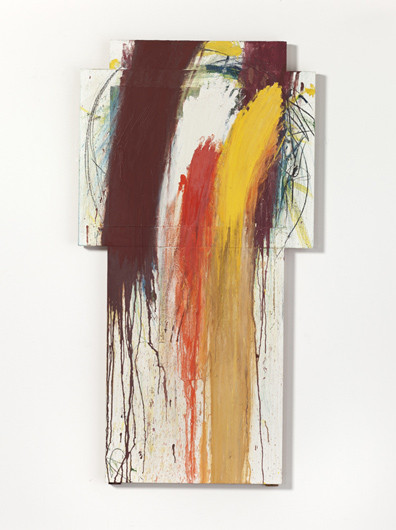 Parallel to the collaborations, we are showing eight works chosen by Arnulf Rainer
from the block of works on the motif of the cross, dating from between 1979 and
1989. Since the 1950s, Rainer's work has developed in dialectic tension between
the extremes of calm, meditative brush-strokes and vigorous physical expressivity.
The process of covering the surface of pictures, effective in Rainer's method of
overpainting and often resulting in almost monochrome paintings, contrasts with the
series of gestural, body-related works deliberately executed at high speed, such as
the Finger paintings, Body poses or the reworked portrait photographs of the Face
farces. The motif of crosses and crucifixions runs right through Rainer's oeuvre,
constituting an unremitting struggle for an omnipresent form. During the 1980s, the
artist hurled paint roughly on to the cross - sometimes with his bare hands - and
expressive streams of colour ran down the photographic reproductions mounted on
the cross. Especially the crosses from this period reveal a particularly eruptive
energy.
www.ropac.net