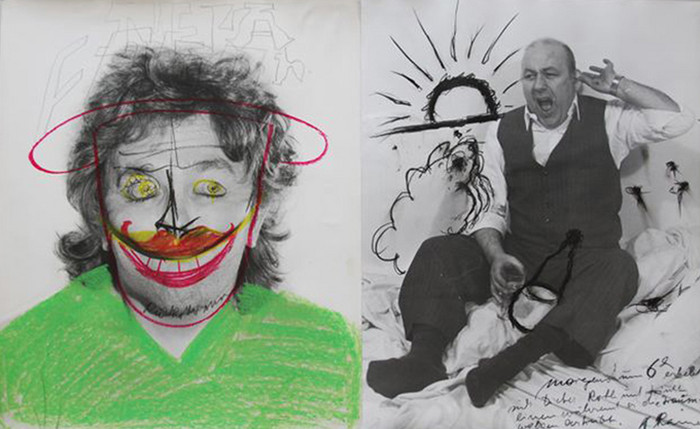 We take pleasure in announcing an exhibition of collaborative works by Arnulf Rainer and Dieter Roth, carried out in Vienna between 1973 and 1978. 60 drawings, paintings and overpainted photographs offer an insight into one of the most intensive and productive collaborations in the
art of recent decades. The majority of the works shown in Salzburg were first exhibited in public between 2006 and 2009 in the Deichtorhallen, Hamburg, the Sala Alcala, Madrid, and the Vienna Belvedere. Arnulf Rainer (b 1929) and Dieter Roth (1930-1998) had known each
other since the 1960s, but it was a solo exhibition by Roth in the newly founded Galerie Grünangergasse in Vienna in 1972 that gave rise to initial joint drawings and prints. Until 1979, Rainer - already internationally the most influential contemporary Austrian artist - allowed Roth to use a room in his atelier apartment in the Mariahilferstrasse in Vienna, so that Roth stayed frequently in Vienna, and worked with Rained in extended day and night sessions to create this series of works. Over thirty years ago, parts of the series were shown only in two small exhibitions in the Galerie Grünangergasse in Vienna and the Kulturhaus in Graz.
Subsequently it was largely forgotten. Roth's epoch-making retrospective in the Schaulager in Basel (2003) and the MoMA in New York (2004) was unable to include the works done jointly with Rainer, since at the time it was not known where these works were.
Rainer and Roth called their joint works mixing and separating, according to whether they worked four-handed on the same motif (mixing) or first divided the ground in order to vie with each other in creating different responses to the same idea (separating). The works are characterised throughout by an exuberant humour which, free of self-censorship and the customary inhibitions that affect the individual artist's career, inspired both Rainer and Roth to new heights. Rainer, especially, appears in his collaboration with Roth in a new and unexpected light: comedy of situation, wit and playful moments become recognisable as characteristics which in subsequent years were to be significant also in his individual work.

Parallel to the collaborations, we are showing eight works chosen by Arnulf Rainer from the block of works on the motif of the cross, dating from between 1979 and 1989. Since the 1950s, Rainer's work has developed in dialectic tension between the extremes of calm, meditative brush-strokes and vigorous physical expressivity. The process of covering the surface of pictures, effective in Rainer's method of
overpainting and often resulting in almost monochrome paintings, contrasts with the
series of gestural, body-related works deliberately executed at high speed, such as
the Finger paintings, Body poses or the reworked portrait photographs of the Face
farces. The motif of crosses and crucifixions runs right through Rainer's oeuvre,
constituting an unremitting struggle for an omnipresent form. During the 1980s, the
artist hurled paint roughly on to the cross - sometimes with his bare hands - and
expressive streams of colour ran down the photographic reproductions mounted on
the cross. Especially the crosses from this period reveal a particularly eruptive
energy.
www.ropac.net