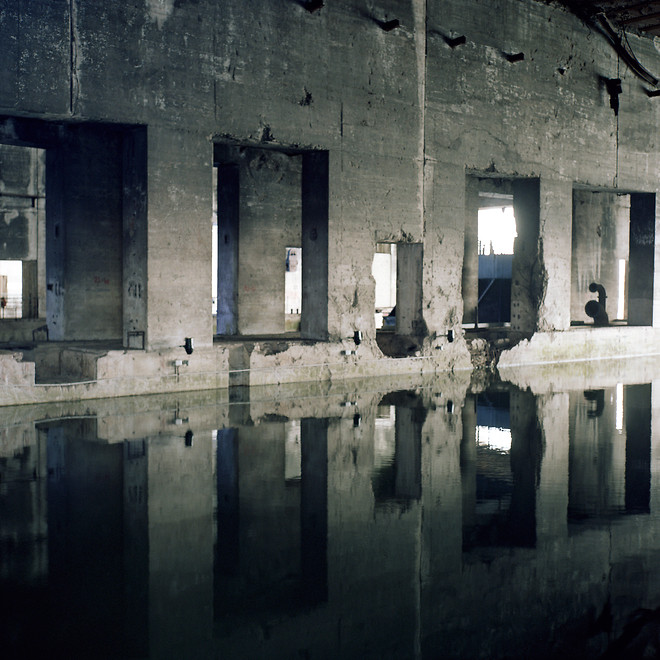 In Prénom Carmen, Godard quotes Rilke: "Beauty is nothing but the beginning of terror which we are barely able to endure". This is how we must understand this invisibility, this intensified invisibility which at once conceals and makes visible. This is the basis of the present work. It means that these photographs – in the sense of an objective investigation – have no documentary dimension, and may only indirectly be taken as a central theme. If there are nevertheless traces or evidence, then these are so in a "spectral" way. Thus cinematographic, pictorial echoes are manifest, giving expression to the invisible and opening it up for other phantoms. (Alain Bonfand)

Galerie Thaddaeus Ropac is delighted to present the work of the young French photographer Claire Adelfang, for the first time in Salzburg. The intensity of her vision, marked by outstanding abstractive power and concentration on light and composition, is demonstrated particularly in the way she focuses on precise, surprising elements – not following customary ways of viewing things, but expressing a highly individual visual perception.

Observing through dilapidated buildings whose vast dimensions emphasise the absence of human life, she focuses on details of plant life, a stretch of water or a crack in a wall, in order to undermine any kind of over-simplified view. Her work challenges conditioned perception and predetermined aesthetic appreciation, offering instead a poetry of existing elements and a subtle dialogue between the ruins and those who venture to enter. She invites the viewer to take a holistic view of the picture, ignoring what is all too obvious and seeking out latent features. So it is a matter of imagining oneself into the photograph and deciphering its hidden sense through associations. Claire Adelfang rejects both pseudo-objectivity and specified meanings; her intention is to leave the viewer to his own inward and outward realisation.

Claire Adelfang gained a diploma from the École Nationale Supérieure des Beaux-Arts Paris (ENSBA) in 2010. Her work has already been exhibited in several public and private institutions, including the Institut Culturel Bernard Magrez/ Bordeaux, at the exhibition Rêves de Venise. In 2013 her photographic work was nominated for the Prix Meurice and the Prix MasterCard. Her video work was shown in an installation at the 2013 Nuit Blanche.
www.ropac.net