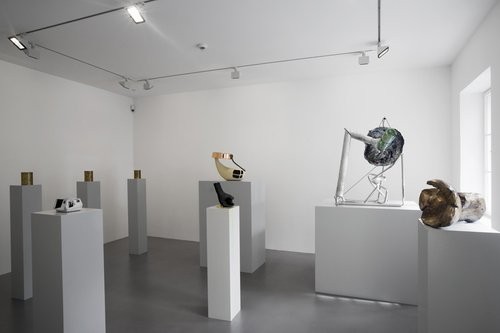 In August 2007, the Galerie Thaddaeus Ropac will open a Department for Editions in the recently renovated right wing of the Salzburg gallery. After the opening of the 'Annex' in Salzburg and of the Department for Drawings in the gallery in Paris, the Editions project is a further step towards expanding and specialising the range of the gallery.
From an intellectual point of view, this is a very exciting time for dealing with the topic of reproduction in art. Even before the Industrial Revolution in the nineteenth century, graphic reproductions could already be considered a mass medium of communication. Their main purpose was to make images from other media accessible for a broad public. At the same time, there were always artists who were not interested in reproduction as such, such as Dürer, Rembrandt, or Goya, but rather wanted to exhaust the aesthetic and technical possibilities of graphic art. And that is the starting point for the new Department for Editions: it shall become a platform for a historic art medium and allow artists to realise projects that exploit its creative possibilities.
In the new building for editions, works of art from various media-from classic etchings to digital prints as well as sculptures in small numbers-will be shown. This new line of the Galerie Ropac will be opened with DELICIOUS, an exhibition of sculptures dealing with 'food': Slim Fast cans and a popcorn cast in bronze by Sylvie Fleury meet burger wraps by Tom Sachs and surreal hybrids by Bernhard Martin.
The new Department for Editions will be led by Lena Maculan. As a doctoral candidate at the University of Leicester, she previously authored publications on contemporary art, museums, and new media. Prior to that, she edited the catalogue raisonné of Elaine Sturtevant in cooperation with the Museum für Moderne Kunst Frankfurt, was a research associate in the Vitra Design Museum Berlin, and worked with galleries in Vienna as well as the Galerie Thaddaeus Ropac in Paris (2000-01).
www.ropac.net