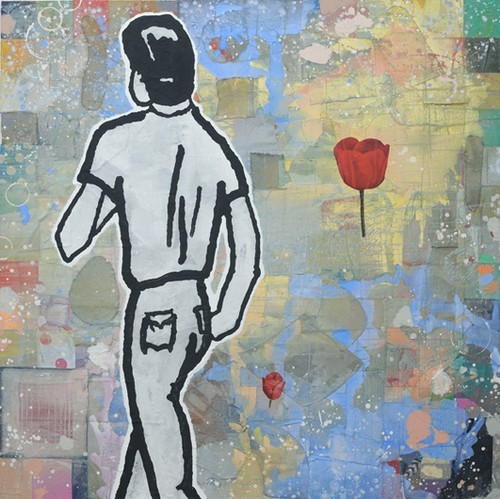 We are pleased to announce a solo exhibition of New York artist Donald Baechler. The exhibition joins recently created bronze sculptures of individually isolated flowers and combinations of painting and collage on paper and canvas characteristic of Baechler and that are based on stylized depictions of young men that appear to be taken from outdated comic books.
"I'm interested in discreet and very mute objects, and I've never really been interested in narrative or psychology or these things, which many people read into my pictures and probably into the sculptures", Donald Baechler remarked recently about his work, which has been exhibited worldwide since the early 1980s. Baechler's painting works typically synthesizes the European tradition of Art Brut with the striking approach of American Pop Art.

Some twenty years ago, in an effort to relearn drawing, Baechler set out to invent a naïve vocabulary of lines and forms. In a paraphrase of the works of Jean Dubuffet, it was oriented towards the world of images used by children, naïve artists and the mentally ill. "When I started doing sculptures, about ten years ago, I was looking again for a way to make forms as if I'd never made sculpture before. So I wanted to forget about armatures and about the proper way of using clay and the proper way of doing anything, and started just squeezing things with my hands, making shapes," explained Baechler in a 2004 interview.

In their complex structure, the surfaces of Baechler's sculptures reflect the craft involved in the process of kneading and forming. His treatment of the objects with different-colored patinas and wax polishes gives the surfaces a painted appearance. The reference to Baechler's drawings and paintings is evident in the directness with which he transcribes the respective motifs into the third dimension. Baechler's motifs can be found firstly in drawings, then in collages and gouaches, and they finally become sculptural in a third stage.

Donald Baechler was born in Hartford, Connecticut in 1956. He studied at the Maryland Institute College of Art in Baltimore from 1974 to 1976 and at Cooper Union in New York City in 1977/78 and at the Hochschule für bildende Künste (Städelschule) in Frankfurt am Main in 1978/79. He taught at the Salzburg Summer Academy in 2004. Baechler's sculptures and paintings are represented in many public and private collections, including in the three New York museums, the Museum of Modern Art, the Whitney Museum of American Art and the Guggenheim Museum; in the Los Angeles Museum of Contemporary Art; in the Stedelijk Museum Amsterdam; and in the Centre Georges Pompidou Paris.