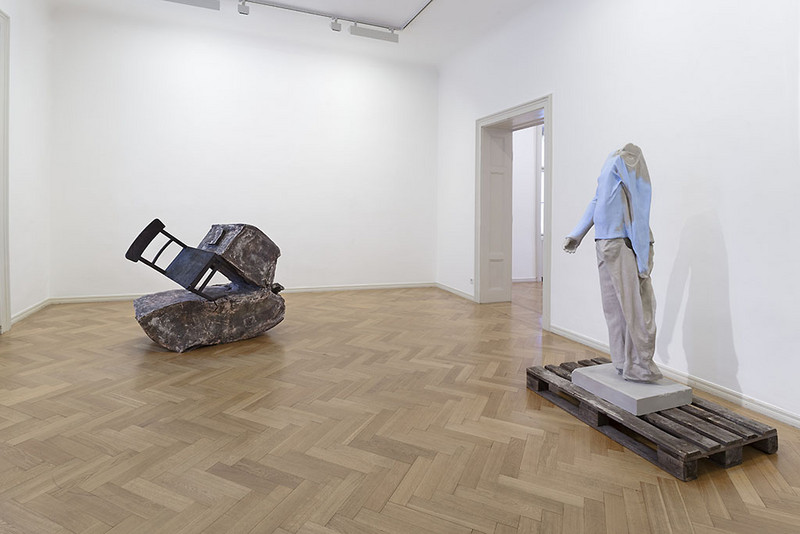 In a comprehensive solo exhibition in the Villa Kast Galerie Thaddaeus Ropac Salzburg is showing new sculptures by the Austrian artist Erwin Wurm. Ceramic works by the artist will be shown for the first time, as well as bronzes and sculptures assembled from various materials including textiles, polyester and wood.

In his work, Erwin Wurm has done much to expand the concept of sculpture, and he uses absurd and comic elements of contemporary society – particularly in relation to the human body. In his sculptures and performances, he has repeatedly re-drawn and extended the fragile boundary defining a visible form from inside and outside, fundamentally challenging and questioning the viewer's perception of reality.

The combination of materials in his œuvre creates spaces and allusions that far transcend the relation between viewer and object. In Angst / Lache Hochgebirge, a black chair appears to split open a house; the two objects stand in a specific relationship, developing a network of relationships that takes shape beyond the viewer. Here deformation has taken over a considerable part of the figuration (Erwin Wurm, 2014).

According to Aristotelean tradition, the "substance" of things lies in their autonomous reality, and less in the human activities that assign meaning to them or attempt to wrest from them their physical secrets. The object is more than simply its relation to man. This is precisely the direction in which Erwin Wurm wishes to take the viewer. Thus for instance, in Hochgebirge a black refrigerator clings to a warped high-rise building, or sausages stand or lie on chests of drawers. Here man is no longer the measure of all things – like the Earth after the Copernican revolution. This brings about a new form of materialism, or "realism", which accepts that things are not subordinate to man, but follow natural laws of their own. Markus Gabriel sums it up: There is not one single world, but many, many different perspectives on the world. (Markus Gabriel, 2013). Thus material assumes a different status – as for instance in Erwin Wurm's latest ceramics, manifested with volume and materiality in an Origami or a Tantum Verde. In the new burnt clay sculptures I'm guided by the material ... it's as though I'm merely following the sculpture – it guides and leads me (Erwin Wurm, 2014).

Also on display are bronze sculptures, some of them monumental, consisting of sausage-like forms; some of these were already part of the artist's solo exhibition in the Lehmbruckmuseum, Duisburg, in September 2014. In the 'sausage' works, I tried to use an everyday object (food), liberated from its content, as a kind of abstract module. I could just as well have made these compositions out of wooden planks or blocks, but I wanted to use a biological form. Ultimately, it's not a question of creating a cynical image of human figures, etc., but of bringing out an abstract quality in everyday realities (Erwin Wurm, 2014).

In 2015 and 2016, Erwin Wurm is to be represented in a total of 14 institutional solo exhibitions worldwide. The first of these opens in the Indianapolis Museum of Art/USA in January 2015, followed by the Kunstmuseum Wolfsburg/Germany in March and the Sara Hilden Museum in Tampere/Finland at the end of April. In 2014, his solo exhibitions included the Städel Museum in Frankfurt and the Lehmbruck Museum in Duisburg/Germany. His works are included in the collections of many distinguished institutions, such as the Centre Pompidou/France, Guggenheim Museum/New York, Gemeentemuseum/Den Haag, Kunsthaus/Zurich, National Museum of Art/Osaka, National Gallery of Victoria/Melbourne Museum Ludwig/Cologne, Städel Museum/Frankfurt, Lenbachhaus/Munich and Albertina and Belvedere/Vienna.
www.ropac.net