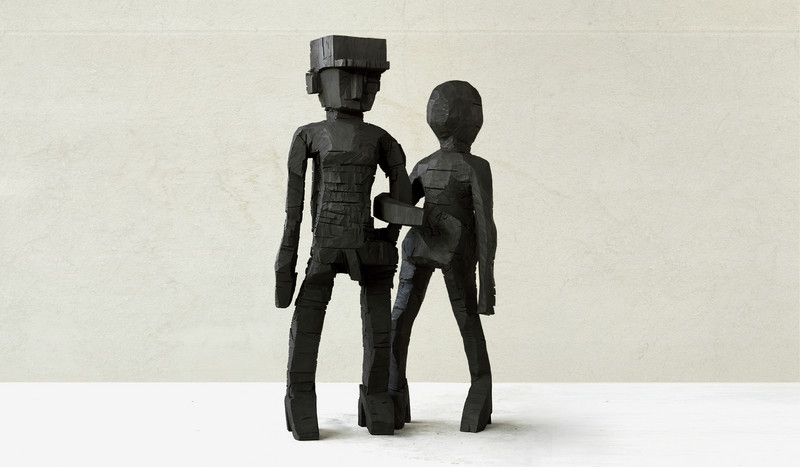 From 27 July 2012, Galerie Thaddaeus Ropac is showing a new series of works by Georg Baselitz. In a proclamatory act in 1969, Baselitz turned the motif upside-down (acknowledging debts to Willem de Kooning and Jackson Pollock), thus "liberating representation from content". He now brings a further reversal: from positive to negative – with unreal colouration drawn from the photographic negative.

"The positive evidence in the image contains what it is not. The negative reveals what is reversed by what is visible – as though the greatest resource of art were to combat the visible with what is in itself invisible. There is no doubt that we are dealing here with Photoshop, but basically there is a lot more to it: our thought-processes – the way a great painter thinks when he is determined to find painting in the place to which it leads him, whether it will or not; as the consequence of a radical optical decision for which it is responsible, whether he wishes it or not" (Eric Darragon).

The exhibition, which includes 25 works on canvas and a monumental sculpture, is divided into three groups. In one series, Baselitz refers to the well-known painting Bildnis der Eltern II [portrait of my parents] (1924) by Otto Dix (1891-1969), which is now in the collection of the Sprengel Museum in Hanover. Baselitz (who, like Otto Dix, comes from Dresden) has replaced the heads of Dix's parents with those of his own. The emphasis of the composition appears to be on the gnarled hands and the faces of the elderly couple. In a second series, Baselitz portrays his artistic predecessors, protagonists of Expressionism, Ernst Ludwig Kirchner, Karl Schmidt-Rottluff, Erich Heckel and Edvard Munch. These portraits are reminiscent of Baselitz's early work at the beginning of the 1960s, when "the painter educes from a head or a portrait its own immanent world" (Eric Darragon). A third group contains works in which Baselitz refers to his own series of Russian Paintings (1998-2001), where he caricatures the social realist works of his youth, paraphrasing them in the style of German Expressionism. In the present sombre colouration, they seem bereft of any feigned positivity or Communist pathos.

The sculpture Sing Sang Zero (2011), a monumental double portrait, is a perfect synthesis of the cultic, fetishistic essence of African sculpture and the pathos of Expressionism. Eric Darragon aptly describes this black double figure as "the acid test of an ancient motif, dug up out of the dim and distant past like an archaeological find for a pas de deux before the eyes of Willem De Kooning".

Georg Baselitz, born Hans-Georg Kern in Deutschbaselitz (Saxony) in 1938, is indisputably one of the most important artists of our time. He represented Germany at the 1980 Venice Biennale, and his works were shown at documenta 5, 6 and 7 in Kassel in 1972, 1977 and 1982. In 1995, the Guggenheim Museum in New York held a comprehensive retrospective of his work, later shown in the Los Angeles County Museum, the Hirshhorn Museum in Washington DC, the Nationalgalerie Berlin and the Musée d'Art Moderne de la Ville de Paris. The Royal Academy of Art in London held a further important retrospective in 2007. In 2006 and 2007 the Pinakothek der Moderne/Munich and the Albertina/Vienna presented his Remix paintings, self-referential reprises of historic works from the past – on the style of which the works in the present exhibition are modelled. The Musée d'Art Moderne de la Ville de Paris held a retrospective of Baselitz's sculptures from September 2011 to January 2012.

A book with texts by Eric Darragon will be published to accompany the exhibition.
www.ropac.net