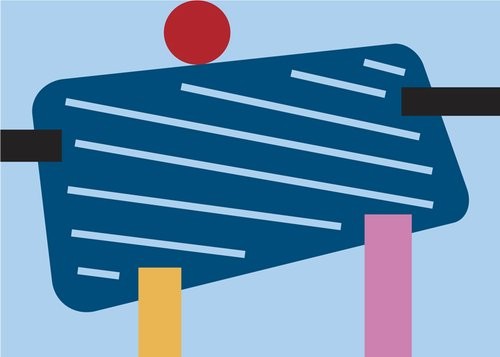 It may be said without exaggeration that the response from institutions to the work of Gerwald Rockenschaub (b 1952 in Linz, resident in Berlin) has currently reached a peak: in 2004, the Vienna Museum of Modern Art held a comprehensive retrospective of his work, some weeks ago he received the Fred Thieler Award for Painting at the Berlinische Galerie, and several of his works - including site-specific installations - are presented in documenta 12, which opened a few days ago.
Gerwald Rockenschaub, one of the internationally best-known Austrian artists, is also successful as a (techno) musician and DJ. Music is part of his cultural background, against which, since the early 1980s, he has created a complex œuvre ranging from painting through prints and foil paintings to computer animations, sculptural objects and room installations. His work is characterised by analytical thinking and the principle of reduction to a few essential elements and structures. Aesthetically, it belongs to the fluctuating crossover between club culture, design, architecture, art discourse and pop culture, but also relates to ideas and positions of the Modern movement as well as everyday phenomena and the institutional context of each particular exhibition.
His first works, dating from the early 1980s, resemble signets; they combine almost playfully, in stereotyped symbols and formulaic geometrical reduction, colours, forms and partitioning of the image area. There follows a radical change in Rockenschaub's work, with a rapprochement of art and techno scenes. From the late 1980s, he uses industrial materials, such as Plexiglas or PVC, and mechanised processes - screen printing instead of painting, or computer processing for the preparation of pictures, installations and exhibitions.
We are delighted that the inauguration of the gallery's new wing - the ANNEX - has met with such a positive response through the solo exhibitions of the young Berlin artists Marc Brandenburg and Marcus Sixay.
Now Gerwald Rockenschaub will show a series of small-format works on canvas, which on the one hand manifest the aesthetic typical of computer-generated forms and on the other, through their materiality and the classic form of presentation, evoke the aura of historical panel-paintings. Together with a special colour concept for the walls, this will create an atmosphere typical of a Rockenschaub show.
www.ropac.net