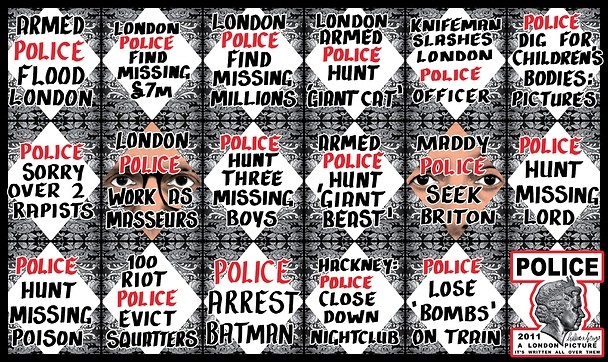 From 23 November, Galerie Thaddaeus Ropac in Salzburg will show a group of pictures from the latest series by the English artists Gilbert & George.

Gilbert & George have spent many years preparing these London Pictures, which mark a new period in their work. They took thousands of photographs documenting a widespread peculiarity of the press landscape in England: posters with sensational headlines advertising the newspapers on sale in kiosks. They are like heralds blaring out fanfares, titillating public curiosity about the most outrageous and brutal stories of the day.

The events thus publicised are presented on the posters, and in the newspapers themselves, as "sensations", news which the passer-by – even catching only a brief glimpse of the headline – really has to buy the paper to find out more. These announcements attract attention by reporting almost exclusively criminal incidents: brutal assault, rape, robbery, murder and manslaughter – such are the topics that can be expected to rivet public attention.

"These calculated expectations, which Gilbert & George see as a social phenomenon, assume in the reader – whether or not he is aware of it – a relish for excesses of violence. The artists have re-worked the photographs of these posters with specific intent; as a background to the writing on the poster, they have added pairs of eyes which look at the viewer through the text – as though questioning his state of mind and his attitude to the horror realised by the words, which show a reality of which the viewer is himself a part, just as the two artists are also a part. Here, with the penetrating, critically questioning eyes, they represent the social individual. This links the new series with previous pictures by Gilbert & George in which, since the mid-1960s, they have frequently portrayed themselves – first as Living Sculptures, and most recently as witnesses and protesting victims in the quirky series of monumental Jack Freak Pictures, which launches a fierce attack on the conditions and moods of contemporary western society. In a quite different manner, the latest group of pictures from the studio of the two courteous, elegant gentlemen in London's East End once again manifests this angry look at the world around them – and around each of us" (Peter Iden).

Gilbert (b 1943 in St. Martin in Thurn, Italy) studied at the Wolkenstein School of Art in South Tyrol, the Hallein School of Art in Austria, and the Munich Academy of Fine Arts, before attending St. Martin’s School of Art in London. There, in 1967, he met George (b 1942 in Plymouth, UK), who had previously been a student at Dartington Hall College of Art and Oxford Art School. During the 1960s, Gilbert & George expanded the concept of sculpture by making themselves the materials for their art-works, as Living Sculptures. They declared everyday activities to be art, and provoked opposition by using faeces, urine and sperm as principal motifs in their picture series. The duo was awarded the 1986 Turner Prize, exhibited in the British Pavilion at the 2005 Venice Biennale, and has held exhibitions in venues ranging from the Stedelijk Museum in Amsterdam (1971 and 1996) to the Tate Modern in London (2007).
www.ropac.net