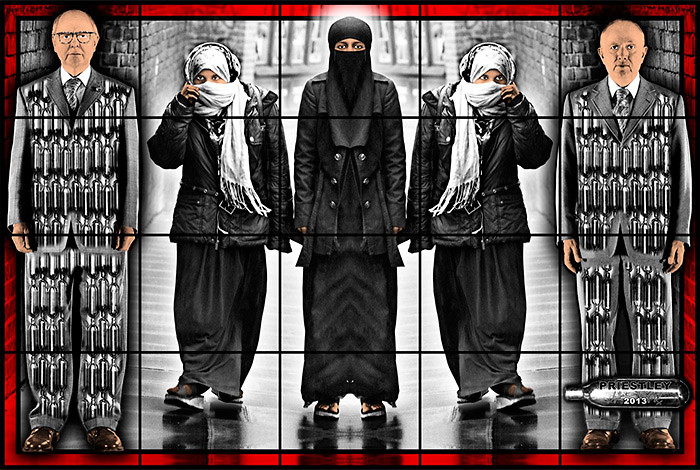 Over the decades, Gilbert & George have observed the evolution of their East London neighbourhood and our modern world, dealing with the perpetual flux of urban life. In these pictures, the figures are acting in a way, which recalls how Gilbert & George saw themselves as ‘Living sculptures’, binding societal problematics and art together with a deadly serious way of describing a world of intense emotion, past, present and future.

These new pictures, all from 2013, reveal a modern western world through Gilbert & George’s sociological environment by exploring the tensions generated by the coexistence and the interaction of its inhabitants. The pictures are populated by young people from different races and backgrounds, veil-clad Muslim women, and Gilbert & George themselves, masked in some or covered in small bomb-like canisters of nitrous oxide in other pictures, adopting different guises, sometimes appearing as shattered forms. They describe, as they have always done throughout their artistic practice, our modern urban world, by tackling subjects – death, hope, life, fear, sex, money, race and religion – in an engaging and direct way.

The exhibition will create a tremendous environment before travelling to several museums. A book accompanies the exhibition, inlcuding a comprehensive essay by the novelist and cultural critic Michael Bracewell.

Gilbert, born in the Italian Dolomites in 1943, and George, born in Devon, England in 1942, both art students, meet in 1967 at St Martin’s School of Art in London (now Central Saint Martins College of Art and Design). At the end-of-year-show, the Snow Show, Gilbert and George created their first art as a joint effort, far removed from the formalist criteria of the art taught. In 1969, they created their first “Singing and Living sculptures”, making themselves both subjects and objects of their works in a perfect fusion of their art and their everyday life. Gilbert & George then start to appear as “Living sculptures” in museums and galleries. In 1970, during a renowned presentation, they sang and moved along Flanagan & Allen’s song Underneath the Arches for hours. The pictures dating from 1971 are the first grid-arrangements, which would henceforth become their formal signature. In 1980, their iconography becomes more complex containing endless levels of meanings from symbolic and allegorical to the most unbridled eroticism, to the religious, political and personal.

Gilbert & George have created together as an artist for over 40 years and have created more than 2000 artworks.