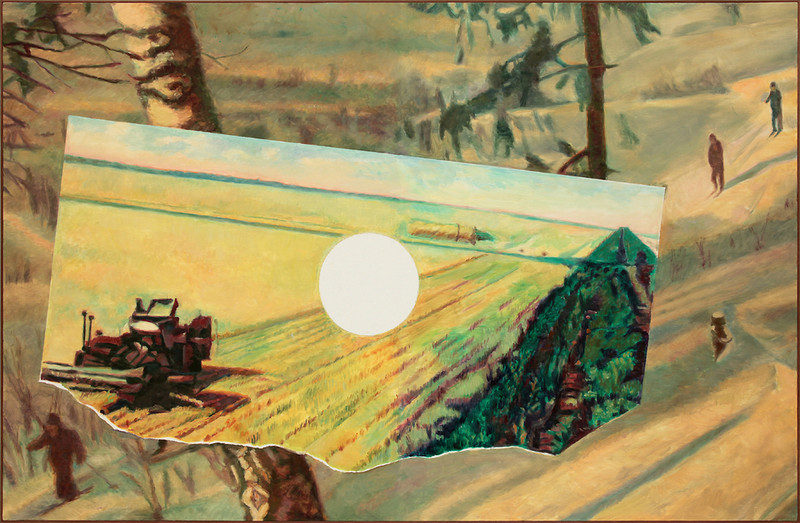 Galerie Thaddaeus Ropac is pleased to present new paintings by Ilya and Emilia Kabakov in the exhibition PAINTINGS ABOUT THE SUN. The exhibition takes place in Salzburg at the Villa Kast from 6 June – 12 July 2014. These paintings show a new departure from the works now on view in their monumental installation THE STRANGE CITY/Monumenta at the Grand Palais in Paris until 22 June 2014.

llya Kabakov was born in 1933, Emilia Kabakov was born in 1945, both in Dnepropetrovsk (USSR). The Kabakovs have been working together collaboratively since 1989. They live and work in New York. They have created large scale projects and ambitious installations throughout the world including the Russian Pavillion of the 45th Venice Biennale in 1993 and Documenta IX Kassel, Germany 1992.

Of the new paintings in this exhibition, the breadth and latitude of Kabakov’s painted work can be clearly discerned.

Four Paintings about Sun are an intricate construction of two layers of imagery taken from Kabakov’s own drawings, and referring sometimes to 1950s memories. The images are carefully constructed and laid upon each other so that one image dominates the contrasting background of the other. The first layer is clearly a cut-out, whilst the background image covers the edge of the painting. Both images are turning around the central dominating void of an illuminating white circle that penetrates into the canvas referring to the sun. It is about the sun and how all revolves around the sun and how it is always present within us. At the same time the theme of the void shows energy within the white. Here abstract forms are combined with those of reality.

The Paintings about Sun, #3 applies a lavish 19th century interior against the contrast of a mountainous snow-covered forest depicting an idyllic motherland creating a stark contrast full of tension by imposing the white empty void. We enter the world of the past and with the white void we are brought back into the now. The painter refers to a distinct genre or style by creating a new form.

In the painting Two Fragments, we see images of an entirely different colour palette: bright blues of the sunny sky painted in the colours of brief memories of Socialist propaganda films. The combination of these fragments denies their individual historical reality and at the same time forms a new combination.

‘A very important point about my paintings is that I do not know who those people are, what kind of space that is, what they are doing there. This is essential I do not want to know. In classical painting, something is always known about the person depicted. I see a world, but I do not see it, I push it away. It’s like a dream, a nightmare, but yet you live in it'. (From Willelm Jan Render’s interview with Ilya Kabakov in Moscow 31 March 2013, published in Ilya Kabakov’s catalogue raisonnée, 2008-2013, Vol.III).

Another work in the exhibition Variation of a Baroque Theme refers to colour and layering of different styles. Coming from a truly conceptual background in which the concept always dominates the painting, here, Kabakov, frees himself so colour becomes the subject of the painting. To Kabakov the tradition of the Baroque defines the depth of the painting, its spatiality and the submersed state of all the objects and depicts himself and his wife Emilia on the left discretely emerging sideways out of the dark.
www.ropac.net