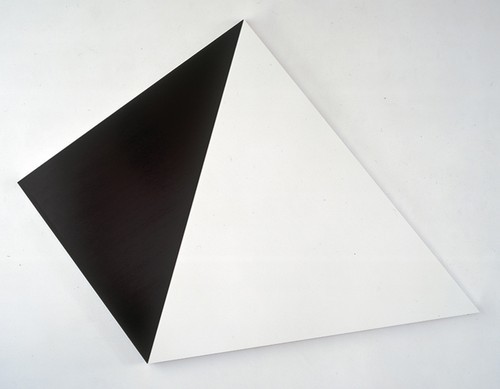 We take pleasure in announcing the opening exhibition in our new premises, devoted to Imi Knoebel (b 1940), probably the internationally best-known German abstract artist.

We are showing a series of ten large-scale black-and-white works created in 2009 and 2010 as a contemplative contrast to his previous phase of excessive use of colour. They are a reference to Knoebel's projections and light figures of the late 1960s and '70s, taking these from immateriality into objectification. In this context, the wall assumes the function of the pictorial ground so that the aesthetic distance to the real world is dissolved. The loss of real relation with a picture support and its inherent conditions, and the dynamic correspondence between various shades of black and white in the object and the white wall become manifest in this new series. In addition, the outline of the objects awakes the association with representational architectural forms and their shadows. Knoebel's Weisse Bilder of the early '70s and his Schattenräume of the '80s form two further historical points of reference to the new series.

Klaus Wolf Knoebel spent his childhood near Dresden, and moved with his family to Mainz in 1950. At the Arts and Crafts School in Darmstadt, together with Rainer Giese, he learned constructive and structural composition (1962-64) in a course based on the ideas of the pre-Bauhaus course taught by Johannes Itten and Lászlo Moholy-Nagy. Fascinated by the teacher Joseph Beuys, the two friends - who both adopted the same first name, Imi - transferred to the Düsseldorf Academy of Art (1964-71). At a physical distance from and outward contrast to Beuys, Knoebel created his first installation Raum 19, with a variety of geometrical objects. Similarly to his fellow-student Blinky Palermo, with whom he shared a studio in 1968, he concentrated in analytical series on the relation between space, picture support and colour. His reduction of painting to its elementary coordinates stems from his great predecessor Kasimir Malevich. "The most valuable elements in a creative painting are coloration and surface structure. They constitute the essence of painting, but this essence has always been overpowered by the subject", Malevich asserted at the beginning of the 20th century.

"Poetry of precision is a description of the presence throughout the work of rationality and irrationality, of calculation and intuition, of reason and emotion, a description of a technical objectivity that establishes the work, without any artful tricks, in a vital field of tension between materiality and spirituality" (Max Wechsler, 2002). The simultaneity of constructive precision and painterly freedom is a fundamental characteristic of Knoebel's newer aluminium works. Projects such as Deutsches Tor and Kinderstern (both 1988), testify to the artist's socio-political commitment

Besides museum exhibitions including Düsseldorf (1975), Winterthur and Bonn (1983) and Hamburg (1992), Knoebel was also represented at documentas 5, 6 and 7. In 1996 the Haus der Kunst in Munich held a major retrospective of his work, and in 2002 the famous Kestner Gesellschaft in Hanover celebrated its 75th anniversary with a presentation of Knoebl's recent works. In 2008 the Dia Art Foundation Beacon (NY) mounted a comprehensive permanent presentation of the legendary block of works 24 Farben - für Blinky (1977) and in 2009 the New National Gallery showed an arrangement of monumental key works relating to the upper hall of the famous Mies van der Rohe building, as well as gestural painting in various shades of white, which used the glass panes surrounding the upper storey of the building. Parallel with this exhibition, the Deutsche Guggenheim Berlin showed works from the collection of the Deutsche Bank and new works. Under the title ICH NICHT, they gave a decisive answer to Barnett Newman's question Who's afraid of Red, Yellow and Blue? The exhibition included novel cubic spatial sculptures painting in primary colours, the purified black-and-white version of which is to be seen in our Salzburg exhibition.

This year, Knoebl's monumental church windows for Reims Cathedral are to be consecrated - a highly symbolic work in the place where Adenauer and de Gaulle made the breakthrough to German-French reconciliation in 1962.

The exhibition WEISS - SCHWARZ is accompanied by a book with essays by Penelope Curtis, Director of Tate Britain, London, and Raimund Stecker, Director of the Wilhelm Lehmbruck Museum, Duisburg.