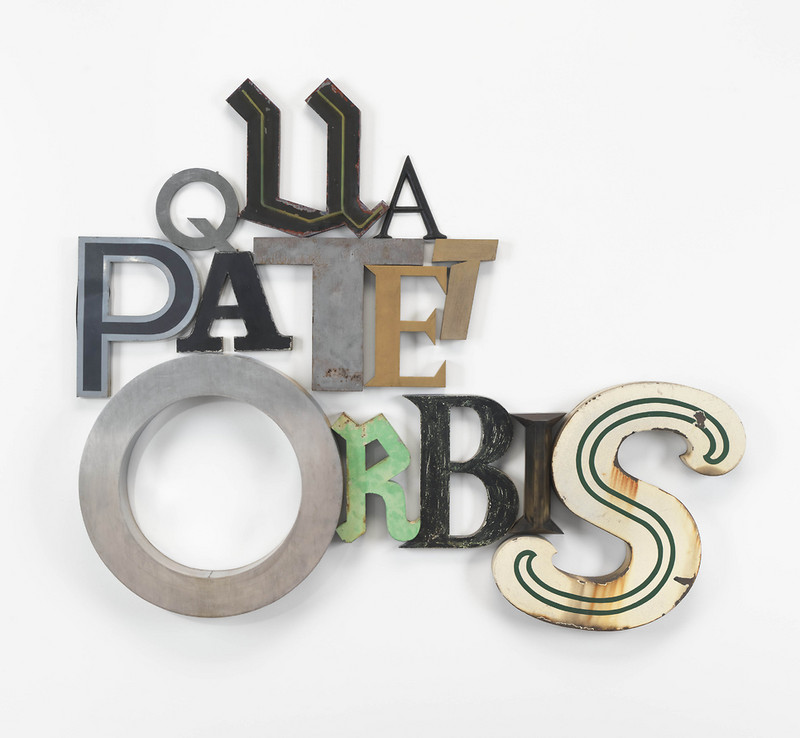 Galerie Thaddaeus Ropac Salzburg presents a solo exhibition entitled A Town Not This One, by Jack Pierson, opening in the Villa Kast on 30 August 2014 – Pierson's ninth solo show in the gallery since 2000.

In A Town Not This One, the works shown are mainly Word Pieces – large-scale wall sculptures comprising letters of different sizes and materials which, with their clear outlines, are diametrically opposed to the hazy, soft-focus effect of Pierson's photographs. The sculptures are composed of found objects which the artist has collected over many years. They might be termed the American variant of concrete poetry, where language itself is represented in the shape of the work.

Whereas during the 1990s Pierson worked primarily with slogans that were often a somewhat melancholy reminder of a long outdated, glamorous Hollywood age, today he is more interested in philosophical topics. The word compositions, skilful combinations of word and material, use classical references, literature and quotations from the Bible, evoking subtle associations for the viewer. His Word Pieces are concise, sometimes laconic, but the echo of his word creations sends our thoughts roaming far and wide. Thus the poetry in Pierson's work assumes a spiritual dimension. He attempts to explore the reverse side of the concept "American Dream", to express what he calls "the inherent tragedy of the pursuit of glamour". In these works, Pierson often plays with subconscious, collective knowledge of proverbs, fairy-tales, song texts and literary clichés.

The title, says Pierson, evokes the idea of Wanderlust, a concept strongly influenced by German Romanticism. The exhibition expresses the inner urge to experience nature (originally "on foot") and the world far from home. Taken together, the Word Pieces in the exhibition form a narrative context: the individual seeks and hopes (ONE HOPES, 2014), and heads towards an uncertain future (THE FUTURE, 2014) constantly encountering imponderabilia (IF, 2014). On a day like this (A DAY JUST LIKE TODAY, 2014) he will be taken to a town, but not this one (A TOWN NOT THIS ONE, 2014).

Jack Pierson was born in Plymouth, Massachusetts in 1960. While still a student at the Massachusetts College of Art in Boston, he co-founded – with four other students including David Armstrong, Philip Lorca Dicorcia and Nan Goldin – the group Five of Boston. Jack Pierson lives and works in New York and in the desert to the east of Los Angeles. His work is represented in many museum collections, including LACMA and MOCA, Los Angeles, Metropolitan Museum of Art, Whitney Museum and Guggenheim Museum/New York.
www.ropac.net