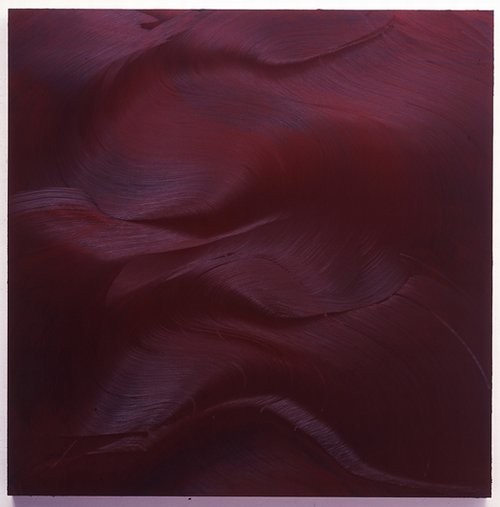 We are pleased to announce our fifth solo exhibition of new works by the artist Jason Martin, born in 1970 in Jersey. Most of the presented works are from the much-noticed exhibition For Gods Sake which was curated by Udo Kittelmann and held at Kunstverein Kreis Gütersloh and Apostelkirche Gütersloh until the end of January.
Jason Martin's »seemingly-made-in-a-minute works« (Martin Maloney) centre on the modernist categories of gesture and monochromity. They reveal the consistent exploration of a subtle artistic style that has continuously been refined over years: for each of his works, Jason Martin designs a special comb with the same dimensions as the painting surface and draws traces on the fresh paint with it. Depending on the material of the mostly sculptured substrate and the paste consistency of the oil paint or acrylic gel, the characters of the surfaces vary. The structures of Jason Martin's works differ greatly: they reach from thin, glazed coats that let the reflective metal substrate shine through to expressive, deep reliefs with fleshy oil-paint lips that gape over the edges of the picture.
In this context, Martin's parallel interest in the art of Paul Cézanne, who always integrated the structure of the substrate in his paintings, and the works of Jackson Pollock, who appreciates processual, performative, and gestic elements is not surprising. With regard to his strategy of creating monochrome surfaces over an extended period of time with a deep sense for materiality, structure, and colour, Martin can be likened to his older painting colleague Imi Knoebel, whereas his interest in frozen brushstrokes bears a formal affinity to young artists such as Lori Hersberger and Fabian Marcaccio.
Already in the nineteen-sixties, artists like Roy Lichtenstein and Sigmar Polke ironised the pathos of abstract expressionism, but Jason Martin isolates its elements and transforms them into independent sculptural formations with a strong sensual presence and highly different psychological connotations.
After having studied at the Chelsea School of Arts and the Goldsmith College in London, Jason Martin was granted a scholarship by the Sohen Ryu Tea Ceremony Foundation in Kamakura (Japan) in 1995 and then took part in many innovative group exhibitions during the second half of the nineties, including Real Art. A New Modernism. British Reflexive Painters in the 1990s (Southhampton City Art Gallery 1995), About Vision. New British Painting in the 1990s (Museum of Modern Art Oxford 1996), and Sensation. Young British Artists from the Saatchi Collection (Royal Academy London 1997). In 2004, Jason Martin's works attracted much attention in the framework of the exhibition Monochrome at Museo Reina Sofia Madrid. At present, Centro Arte Contemporaneo in Málaga (CAC) and Mönchehaus Museum für moderne Kunst in Goslar are holding large solo exhibitions.
www.ropac.net