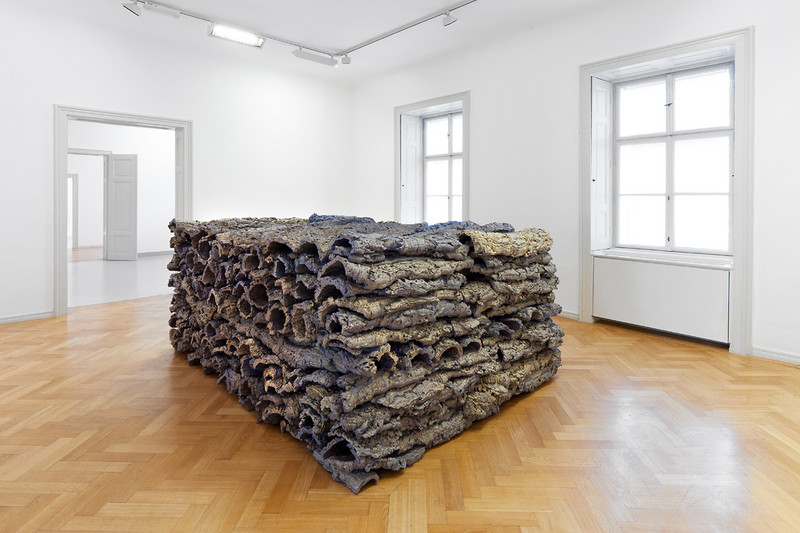 Galerie Thaddaeus Ropac presents a solo exhibition with new works by Jason Martin. The artist was born in Jersey in 1970 and currently lives in London and Lisbon .

Martin's works, which centre on the modernist categories of the gestural and monochrome, appear as a consistent exploration of a subtle characteristic style constantly refined over the years. For each work, he constructs a special comb of the same size as the length of the ground, and uses it to score fine lines in the freshly applied paint, thus creating different kinds of surfaces according to the material of the ground (usually already in relief) and the pastosity of the oil paint or acrylic gel. Jason Martin's works are structurally extremely varied, ranging from a thin glaze that allows the reflecting metal ground to shine through, to expressive, deep reliefs with fleshy borders of oil-paint spilling out over the edges of the picture.

The shiny surfaces look rather like soft human hair combed into flowing waves that capture and reflect the light. These seductive works have a sensuous vitality that lends them warmth, which often contrasts with the usually dark colours. This quality causes Jason Martin's work to stand out from the works of other monochrome artists such as Kasimir Malevich, with his iconic Black Square, Agnes Martin or Pierre Soulages, where light seems to be a vanishing element. Jason Martin occasionally intermixes his paint with different shades of colour, which on close inspection are perceptible as single streaks.

The mass of the pastose surfaces, by contrast, appears to soak up light like a sponge, completely absorbing it. Here expressive colours such as glowing magenta and pink are reminiscent of the blue monochrome works by artists like Yves Klein, which in their bold, viscid colouration compensate for individual reflection by an all-pervading glow. In the pastose black-and-white works, on the other hand, the movement results mainly from the materiality, evoking associations of substances and consistencies that could be either organic or inorganic in origin. Cream or butter, cement or plaster, come to mind. It is rather like a snapshot, as for instance when a cloud moving over the sky is captured in a painting.
The composition of the individual works is striking. Each is self-contained, though apparently with neither centre nor border. This could be a contradiction, but it is in fact this quality that makes unremitting demands on the viewer, at the same time allowing him to relax. The eye does not dart back and forth to follow the movement of the paint as it was applied, but can settle on any point, without the work's seeming in any way monotonous.

Martin's interest in the work of Paul Cézanne (who always integrated the structural composition of the picture support) and of Jackson Pollock, with his regard for the processual, the performative and the gestural, is therefore not at all surprising. Over a fairly long period characterised by a marked sense of materiality, structure and colour, Martin created monochromatic surfaces at times reminiscent of frozen monumental brush-strokes. If as early as the 1960s, artists such as Roy Lichtenstein and Sigmar Polke were treating the pathos of abstract expressionism with irony, Jason Martin isolates its elements and transforms them into autarkic sculptural structures with a strong sensual presence.

After graduating from the Chelsea School of Arts and Goldsmith College in London, in 1995 Jason Martin received a scholarship from the Sohen Ryu Tea Ceremony Foundation in Kamakura (Japan), which was followed by many participations in pioneering group exhibitions in the latter half of the 1990s, such as: Real Art. A New Modernism. British Reflexive Painters in the 1990s (Southampton City Art Gallery 1995), About Vision. New British Painting in the 1990s (Oxford Museum of Modern Art 1996).

Martin came to the attention of a wider public through the now legendary group exhibition Sensation, with works from the Saatchi collection by young British artists (Royal Academy of Arts, London 1997, then Berlin and New York). It marked the birth of the term Young British Artists (YBAs). In 2004, Jason Martin's work attracted great attention at the Monochrome exhibition in the Reina Sofia Museum, Madrid, and in 2008 the Centro Arte Contemporaneo in Málaga (CAC) and the Mönchehaus Museum of Modern Art in Goslar held major solo exhibitions. The following year, the Peggy Guggenheim Collection in Venice devoted a comprehensive solo show to his work.

Works by Jason Martin are to found in the collections of important institutions including those of the Albright Knox Gallery in Buffalo, the Birmingham Museum of Art, the Denver Art Museum, the Hirshhorn Museum in Washington, the CAC Málaga, the Salzburg Museum of Modern Art, the Thyssen-Bornemisza Art Contemporary (TBA 21) in Vienna and the Deutsche Bank.
www.ropac.net