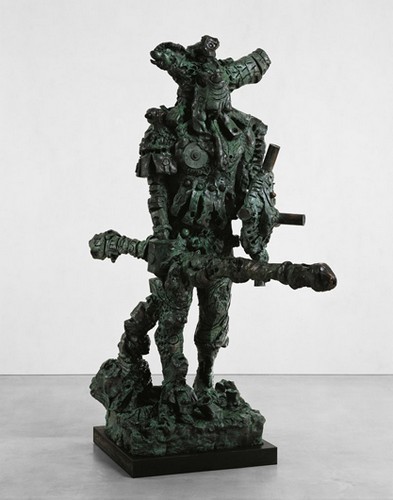 We are pleased to be able to announce you an extensive new sculptures cycle of the probably most popular, most discussed German artist of the younger generations, Jonathan Meese.

Meese's esthetics of the exuberant characterizing his sculptures, pictures, and stage sceneries can hardly be assigned to one definite style or school. Typical for them is a not easily decodable system of signs/badges, neologisms, symbols, and figurative allusions to all types of power seekers, mythical personages and geniuses of history, stars and starlets of pop culture, or fictional heroes of novels and films. Out of them, Meese creates his own universe far from the standards. It is populated by Caligula, Stalin, Scarlett Johannson, Marquis de Sade, Richard Wagner, Balthus, and Dr. No, to name just a few of those
to whom Meese assigns new contexts of meaning, deliberately transcending conventions and following his own laws.

His work sometimes includes the attempt to thematize German mythology and German delusion, and insofar shows a (merely thematic) analogy to the early Anselm Kiefer. "Everything is a toy. There's nothing else to it. Communism, National Socialism, the ancient Egypt or the ancient Rome, nothing will come again. Nor can I any longer hope for a revolution made by the people in the street, humans are not able to achieve that. We should have something different being unleashed: the volcano of art may erupt", Meese recently said in an interview.

With uncanny sureness, Meese moves among all kinds of media he is presented with. Quite recently, however, he mainly devoted himself to the classical fields of painting, drawing, and, in particular, sculpturing.

Meese's position as an artist is defined by his striving for the autonomy of art and for general negation of self-reference. His concern is not about the artist's ego realizing itself in art but about the separation of both spheres from each other. The utopian project of a dictatorship of art - a goal often proclaimed in Meese's performances - is in the centre of Meese's work. As Meese puts it: "Art is completely indifferent about how Jonathan Meese feels."

Meese, born 1970 in Tokyo, grew up in Ahrensburg in Northern Germany, and, from 1993 to 1998 studied at the University of Fine Arts, Hamburg, with Franz Erhardt Walther. Today, he lives and works in Berlin. In the last few years, he had extensive solo exhibitions at 'KunstWerke' Berlin (2000), 'Schirn Kunsthalle' Frankfurt (2004), and the museum of the 'Collection Essl' near Vienna (2007). The first comprehensive overview over Jonathan Meese's work in Germany was organized in 2006 by the 'Deichtorhallen' Hamburg. Works of Meese are exhibited in numerous important institutional collections, like the 'Centre Pompidou' Paris, the 'Gallery for Contemporary Art' Leipzig, the 'Art Hall' (Kunsthalle) Bielefeld, the 'Konsthall' Stockholm, the museum 'Abteiberg' Mönchengladbach, the 'Saatchi Gallery' London, the collection 'Falckenberg' Hamburg, the collection of contemporary art of the German Federal Republic, and many others.