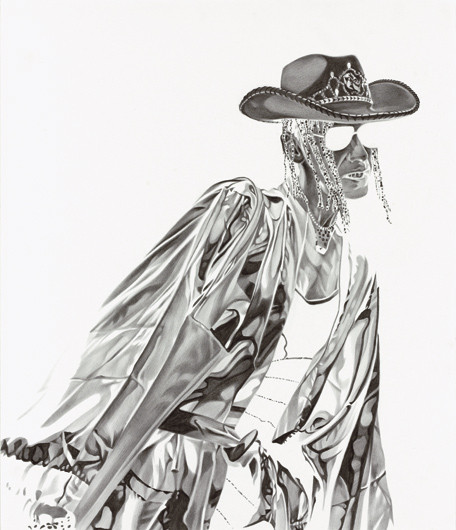 We take pleasure in announcing our third solo exhibition of works by the Berlin-based artist Marc Brandenburg. Entitled Isolated Imagery, it coincides with his major retrospective Deutsch-Amerikanische Freundschaft [German-American Friendship] in the Denver Art Museum, on show until 20 February 2011.

At first glance, Brandenburg's almost spectrally delicate pencil drawings seem like negatives of snapshots from a bizarre parallel world. His realistic scenes with public demonstrators, flag-waving football fans, clowns and fairgrounds, his portraits of friends and relatives, his water fountains and monumentally over-inflated Christmas decorations have an unsettlingly threatening effect. The silvery, shiny materiality of the graphite surfaces is combined with finely-nuanced, gently tapering contours. Everything is bathed in a blaze of unreal light. The motifs on the white paper seem deprived of their original peaceful character.

Brandenburg "examines in drawing the masks and symbols of a ruthless event culture: the ritual
masquerading of football fans, the chubby bodies of fairground figures and mascots, the slogans and symbols on pennants, banners and hoardings" (Oliver Koerner von Gustorf). He draws from his own photographs, which attempt to capture the moment of veering from one motif to another. What concerns him is the interval between them: "It's like a cut in film, or individual stills that make up a film. It's like trying to depict an aura," Brandenburg explained recently in an interview.

In his speech at the award of the 2005 Karl Ströher Prize to Marc Brandenburg in the Frankfurt
Museum of Modern Art, Ulf Poschardt remarked that although Brandenburg stands in the tradition of Pop and its delight in the surface itself, he still combines the aspects of realism and transfiguration in a contemporary manner. Poschardt also said that "it was not so much the media world and its images that Brandenburg captured, but moments of experienced intensity. A timid viewer (and aren't we all, when faced with delicate, intimate drawings?) has the feeling that he is looking at the negatives of snapshots of a deeply-felt life. The refined technical skill of Marc Brandenburg's work perpetuates the snapshot. The moment was given permanence. The shock of the moment has been lastingly sketched in." There is an evident affinity with the 19th-century genre and history painter Adolf von Menzel, whom Brandenburg greatly admires. Also Berlin Neue Sachlichkeit [new objectivity] painters such as Otto Dix and George Grosz can be seen as precursors of Brandenburg.

Brandenburg's iconography often draws on scenes showing loss of control and extremes of corporeality. In 1998 Diedrich Diederichsen, writing about Brandenburg's aesthetics of excess, said that the visual grammar of excess is essentially that of an accelerated or accelerating change of images which are in themselves clearly contoured. Their smallest element is the stroboscopic flash, alternately bright and darkened images where the bright parts produce a sequence of their own; this is then excessively bright, leaping out aggressively at the viewer, yet kept at a distance by the dark interruptions, the effect of immediate proximity thus being mitigated. Brandenburg's drawings endow this experience of the world with intensity and permanence.
www.ropac.net