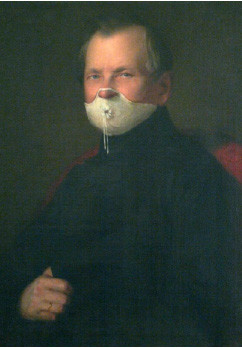 »The psychological analysis of space and body, the eeriness and discomfort, the deficient and the irrational depths of individual and collective existence are the themes Markus Schinwald (born 1973 in Salzburg) works on. The most diverse media—from disturbing films to puppet-like sculptures, from reworked historical paintings to prosthetic designs and clothes—playfully merge in his oeuvre and are subtly choreographed together.
Schinwaldʼs starting and observation point is the human body in its deficiency and eeriness. He no longer shows a firm, stable body, because its controlled shell-function has gone to pieces. Instead, he presents us with an osmotic body stage, a projection surface for the psychologically loaded inner worlds that permanently fight their way out and become manifest there. [...]
In Foucault's words, the body is the zero point at which all paths and spaces cross. The bodies in Schinwald's works symptomatically react to their inner conditions and reflect outer experiences in their pose.
The scenarios Schinwald develops do not follow a linear narration with a beginning and an end, but obsessively and repetitively circulate around a core content.
Thus, the films, pictures, and sculptures that at first appear to remain minimal and cool productions, condense into a complex effective structure that is open to a multitude of possibilities and stories which feed on our collective memory. They lead the viewer into a selfsustaining cosmos, an eerie and surreal system where normative boundaries are dissolved for the sake of the enigmatic and wonderful« (Heike Munder, 2008).
For the Annex of the gallery, Schinwald will develop an installation that refers precisely to the existing space. He will set up a system of corridors that starts at waist height, so the floor remains untouched, and a new ground plan begins at a height of roughly 1.20 m. Inside the narrow, stifling corridor system, Schinwald will arrange pictures and a puppet sculpture.
Recently, works by Markus Schinwald were shown at the exhibitions The World is a Stage at Tate Modern in London (2007), True Romance at Kunsthalle Wien (2007), 3. Berlin Biennale (2006), and others. The most extensive museum solo exhibition of this artist was presented this year at Migros Museum für Gegenwartskunst in Zurich. Kunsthaus Bregenz will dedicate a large solo exhibition to Schinwald in 2009.
Schinwald's works are included in many public collections such as that of Musée d'Art Moderne Paris, Tate Modern London, Kunsthaus Zürich, Kunsthaus Bregenz, MUMOK Vienna, Migros Museum für Gegenwartskunst Zurich, the Belvedere museum in Vienna, MUSAC León, Neue Galerie Graz, Museum der Moderne Salzburg, etc.
www.ropac.net