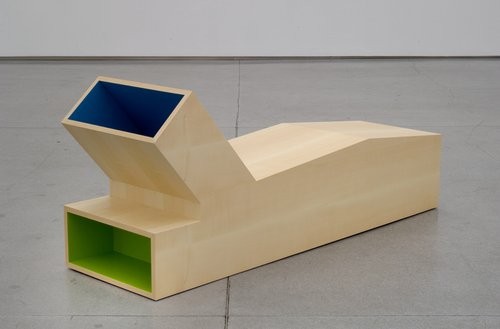 On 15 September 2007, Galerie Thaddaeus Ropac Paris will present for the first time a cooperation project between a designer, Matali Crasset, and an artist of the gallery, Peter Halley. After Crasset and Halley had discovered several affinities between their work, Galerie Thaddaeus Ropac initiated a cooperation between them.
For this project, the gallery will produce an exclusive edition of objects by Matali Crasset and present them alongside Wallpaper Prints by Peter Halley. In the main room of the Paris gallery, new paintings by Peter Halley will be displayed on mural drawings by Matali Crasset.
Four objects from the same edition by Matali Crasset will also be exhibited at Galerie Thaddaeus Ropac Salzburg. The exhibition will be held as of 6 October 2007 in the new Department of Editions. It will be the first time for the gallery to open its doors to design, launching a series of cooperations uniting art, design, and architecture. For each of these exhibitions, Galerie Thaddaeus Ropac will produce an exclusive edition.
Matali Crasset was born in 1965 in Chalons en Champagne, France, and now lives in Paris. The French designer, who was nominated Designer of the Year in 2006 by the Salon du Meuble (Paris), worked with Philipp Starck from 1993 to 1998. Since then, Crasset has had her own atelier in Paris. Crasset's designs have been realised for a number of prestigious brands, including Hermès, Edra, and Artemide. Many of her objects can be seen at private and public institutions, including the collections of the Museum of Modern Art New York, the Victoria and Albert Museum London, and the Musée d'art decorative in Paris.
For more information, please contact Lena Maculan (+43 662 881393 36, lena.maculan@ropac.at).
www.ropac.net