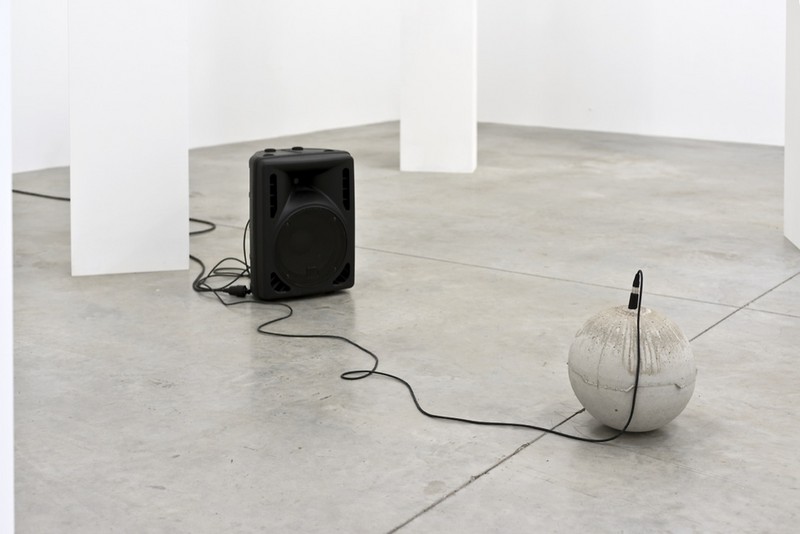 From 31 August, Galerie Thaddaeus Ropac Salzburg is holding its first solo exhibition of works by Michael Sailstorfer (b 1979 Velden/Vils), who lives in Berlin. After participating in a group exhibition in 2006, which presented his monumental fibreglass sculpture Cast of the Surface of the Dark Side of the Moon (2005), previously premièred in the Hamburg Kunsthalle, Sailstorfer is now showing a site-related installation created for the HALLE in the Vilniusstrasse, Salzburg.

"Transformations, context shifts, spatial appropriations – Sailstorfer’s works rapidly reveal the artist’s interest in everyday objects and the materials of our immediate environment, his fascination with the specific identity and history of these objects and the destinies they can evoke – in short, the inherent associations which they trigger, and of which Sailstorfer can make use. He subjects his objects to stringent scrutiny; they are dismantled, stripped down, deformed, adapted, reassembled in novel forms, relocated and rededicated. Such a deformation of the meaning and purpose of the object, exploiting and retaining its formal qualities, does not result in destruction; the aim, rather, is a fresh configuration and a rearrangement of significance. Here, both the space these objects occupy and the space that surrounds them are of essential significance" (Max Hollein).

The Salzburg exhibition centres on the installation Solar cat: 15 stuffed cats, each on a 5m-high plinth, stare as if hypnotised at a lamp hanging above them. The monumentality, the calm, static quality of this work – which refers to the heroic nature of the classical statue – contrast with the noisy, kinetic activity at ground level in the exhibition. Here Sailstorfer shows a work from the series Zeit ist keine Autobahn [Time is not a motorway], a work from his new block of works Lenker [steering wheels], a complicated popcorn machine, a sculpture from the series Reaktoren [reactors], and two films.

For Zeit ist keine Autobahn – Salzburg (2012), Sailstorfer uses a motor to rub a car tyre against the wall until all that is left is black débris, rubber swarf on the floor, and a penetrating smell of rubber. Reaktor (2012), on the other hand, seems "almost like scientific experimentation" (Sven Beckstette). A microphone is inserted into a concrete block which is connected to an amplifier. Every vibration caused by a visitor – even the softest step – is registered by this concrete sound pick-up and amplified. In his sculpture Lenker, Sailstorfer fixes a car steering-wheel to a gallery wall, behind which a motor is concealed, constantly turning over to simulate driving. The Popcorn Machine (2012) makes a crackling noise as, at short intervals, it discharges batches of popcorn which gradually fill the room – like the porridge pot in the Grimm fairytale. The sweetish aroma mingles in the hall with the smell of rubber from the tyre.

The two 16mm films Lohma (2008) and Bulb (2010) will also be shown. A building made of corrugated iron was erected near the town of Lohma (Thuringia). It was then blown up, and the event filmed with a high-speed camera. In the film, the house swells up for several seconds, until it reaches a certain volume. Shortly before it explodes, it contracts again, only to expand anew – part of the film runs backwards. The house breathes. For Bulb, Sailstorfer used a shotgun to shoot at an electric light bulb. During the shot, a high-speed camera circled round the light bulb, recording the shot in slow motion. Sailstorfer's filmed explosion of a simple light bulb becomes a representation of the expanding universe, a model of the Big Bang.

All these works combine to from a concerted, Fluxus-like action, on the one hand distinguished by precision and concentration in the technical execution, on the other containing paradoxical moments of exaggeration and futility. In Sailstorfer's work, soulless objects are endowed with an animated, human quality. During the preliminary work on this exhibition, the project kept expanding, so that the HALLE now shows a kind of Sailstorfer retrospective touching on all aspects of his work.

Sailstorfer studied 1999 - 2005 at the Munich Academy of Fine Arts and at the Goldsmith College in London. Recent solo exhibitions of his work have been held in the Berlinische Galerie (2012), S.M.A.K./Ghent, Kunsthalle/Nuremberg (both 2011), Kestner Gesellschaft/Hanover, North Rhein-Westphalia Art Collection/Düsseldorf (both 2010) and Schirn Kunsthalle/Frankfurt (2008). Works by Michael Sailstorfer are included in the Centre Pompidou/Paris, Goetz Collection/Munich, Städtische Galerie im Lenbachhaus/Munich, Städelmuseum/Frankfurt am Main, MARTa/Herford, and in many other public collections.
www.ropac.net