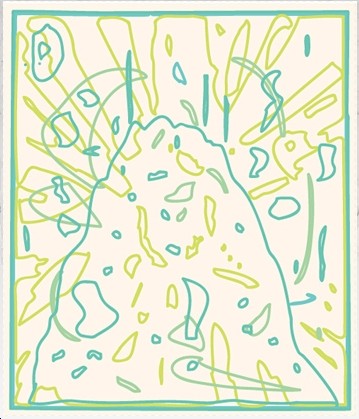 Galerie Thaddaeus Ropac, Salzburg, is pleased to announce the presentation of a series of monotypes by the American artist Peter Halley. The exhibition will be held in the Department of Editions at the Salzburg gallery.
The monotype was invented in the seventeenth century by Giovanni Benedetto Castiglione. In the eighteenth century, it was especially William Blake, in the nineteenth century, Edgar Degas, and then Jasper Johns who created very special works using this technique.
The term monotype describes a technique, where a motif is normally painted on a glass or metal plate and then printed on paper as long as the paint is still wet. Since only a single copy is made, a monotype ("one single picture") is actually an original and not to be classified as a graphic arts. However, Halley uses the term 'monotype' in a different sense. His pictures are not based on a hand-painted process, but generated on the computer and printed digitally. Still, each motif is only printed once. In analogy to classical monotypes, each print is therefore unique. On the one hand, the artist uses one of the most characteristic media of our digital age, but on the other hand, he traces a more than three hundred year old tradition.
From a formal point of view, analogies to abstract styles, especially Hard-Edge and Colourfield Painting as well as Minimal Art, can be found in Halley's pictures. His paintings are known for their hard, geometrical lines and surfaces, whereas the linework in his monotypes is almost surprisingly soft and playful. Thus, these works bring a less known aspect of the works by Halley to light.
Peter Halley was born in 1953 in New York and studied at the Universities of Yale and New Orleans in the seventies. Today, Halley's works belong to the established canon of international museums of contemporary art. The most comprehensive and, from an art-historical point of view, thorough presentation of his works took place in 1998 at Folkwang Museum, Essen.
www.ropac.net