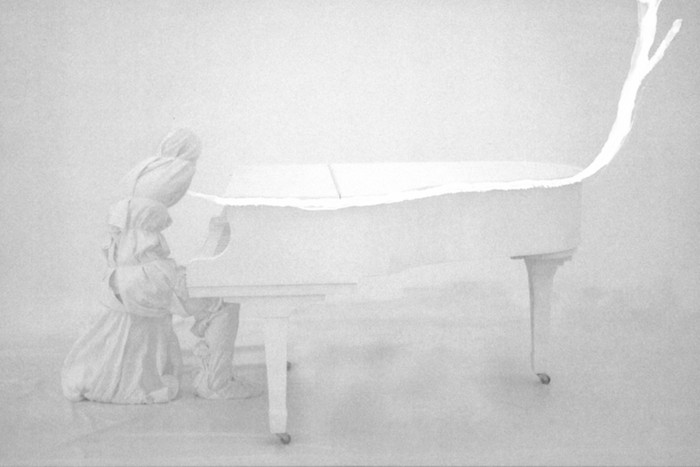 "Often vying between minimalist and baroque sensibilities, Koh's absorbing monochromatic environments and delicately crafted sculptures stage sites of some unknown ritual, where a sense of loss suggests regeneration. The work plays on the melancholic beauty and sublime transcendence of emptiness, evocations of darkness that create our isolated worlds, and the intertwining of life and death."
- Shamim M. Momin

With his monochrome installations, objects, murals and ritual performances, Terence Koh creates an imaginary place where elements of memory and fantasy mingle with elements of art history, also that of the subculture. He treats themes such as mythology, religion, identity, power, fashion and sexuality in an often provocative way, laden with symbolism.

The Salzburg exhibition centres on an installation consisting of two modified grand pianos with added collages and photographs relating to Terence Koh's imaginary opera ADANSONIAS, first presented in 2010 in our Paris gallery. This is a Gesamtkunstwerk - a total art work - combining music, dramatic and visual art, its theme based on the artist's observations on architecture, atmosphere and sensory experience in Paris.
bestehende Insatallation

Terence Koh (born in Beijing, China in 1980) grew up in Missisauga, Canada, and currently lives in New York. He gained his BA at the Emily Carr Institute of Art and Design in Vancouver. In 2008 he was listed in Out magazine amongst the "100 People of the Year", and appeared on the short list for the SOBEY Awards. His œuvre was presented in many international solo exhibitions, including Love for Eternity in Musac, Leon, Spain (2008), Captain Buddha, curated by Martina Weinhart, in the Schirn Kunsthalle, Frankfurt (2008), in the Whitney Museum of American Art, New York, curated by Shamim Momin (2007), in the Kunsthalle, Zurich, curated by Beatrix Ruf (2006), and Gone, Yet Still in the Vienna Secession (2005). Participation in major group exhibitions includes The Collectors by Elmgreen and Dragset in the Nordic Pavilion at the 2009 Venice Biennale, The Porn Identity in the Vienna Kunsthalle (2009) and USA Today in the Royal Academy of Arts, London (2006).
www.ropac.net