The Garden of The Forking Paths 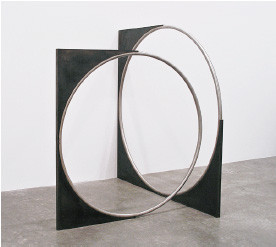 © Nicole Wermers
Untitled - Forcefield, 2008
THE GARDEN OF THE FORKING PATHS

An enchanted garden, paths that run towards no centre without crossing each other. Overgrown sculptures, sphinxes protecting the entry. Bosco Sacro is the Renaissance garden of the 'Villa delle Meraviglie' in Bomarzo, Italy. It was laid out in 1552 by Prince Orsini, for his great love shortly after her death. The garden survived the centuries, and by becoming weather-worn and moss-grown has gathered the patina of an enchanted past.
Today, the garden has grown wild and is still inhabited by the mysterious fabulous creatures hewn out of stone. Each of them asks you a riddle while already pointing at the next one. Thus, on his way, the visitor passes a stone elephant, a gigantic turtle, or a sleeping woman: Ariadne. She declares: "You who have passed the tests, you are entering the Kingdom of Dreams. Dream is a dangerous thing.
"Renaissance is often described as a time of transcendence, as a state of dream – bound up between nostalgia and thoughts of the future. This dreamlike contrast also becomes manifest in the Sacro Bosco. It is not surprising that the garden was rediscovered and discussed at large by the surrealists and later by the flower power youths of the 1968. The writings of the famous author Jorge Luis Borges (1899–1986), to whose short story the title of the exhibition refers, can be seen as an analogy to this mythical garden. Borges' work is shaped by the ideas he associated with different spatial structures: the labyrinth as a basic human experience, the library as a refuge and a map of the universe, or the mirror as a threatening distorted picture and a multiplication.
His metaphors represent codes that refer to ideas of philosophy, mythology, occult sciences, religions, art, and literature and transform them into a fictional discourse. The works of the artists invited to this exhibition – with one exception – can be embedded into this Borgesian and Bomarzian cosmos of thought. They have in common with it a dreamlike, playful dealing with the things, representations, and ideas surrounding us, which creates amazement, invites to look from a novel point of view, and the meaning of which is often not decidable immediately. Indeed, both are full of mysteries which ultimately create more confusion than clarifying anything. They are fantastic stories of an encyclopaedic universe that links mythical ideas with a rationalistic logic.
One sculpture in the Bomarzo garden, which symbolizes the last custodian before access to the under-world is granted, has the sentence carved on its lips "All thought is erased" and opens up the possibility to refrain from known realities and to think them anew. In that way, the invited artists, too, confront reality with fantastic energies and myths, thereby founding a discourse which is ambiguous and fictitious, which lies somewhere between lie and truth, which creates free spaces without direct political content, and which leaves room for our projections.