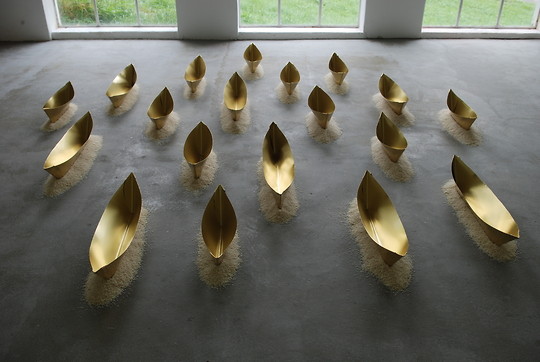 We are especially delighted to present Wolfgang Laib's last major exhibition before his retrospective in the Museum of Modern Art, New York (January - March 2013). The central work will be a new, room-sized installation in Exhibition Room 1 in the Galerie Thaddaeus Ropac Halle, Vilniusstrasse 13, Salzburg. Also on show are ten drawings linked to the installation, as well as several monumental sculptures and a site-related mural drawing.

Wolfgang Laib's materials and working process both demonstrate a singular simplicity, purity and calm concentration. His work is characterised less by innovation or formal development than by strict continuity: regular series of repeated processes, collecting and utilising the same basic essentials – natural substances such as milk, pollen, rice, beeswax and marble – are designed to enhance awareness of the transience of phenomena, and to encourage the mental quest for serenity and closeness to the transcendental. Laib's formal vocabulary, which tends towards abstraction, is based on geometrical figures and bodies such as rectangle, circle, pyramid and cone; only a few alterations transform these into stylised, archetypal motifs of house, mountain, boat or stairs.

The very title of the installation evokes the idea of transformation and the concurrence of the permanent and the transient. The aerial view concedes to the multiple small brass boats atop mounds of rice a spacious setting, a kind of "spiritual precinct". Since 1983, Wolfgang Laib has used grains of rice, a symbol of spiritual nourishment, for his fragile, sensual work. The open form of the little boats – inaccessible conveyances into another world – extends a spiritual invitation for us to strive, in reflection and contemplation, towards unknown goals.