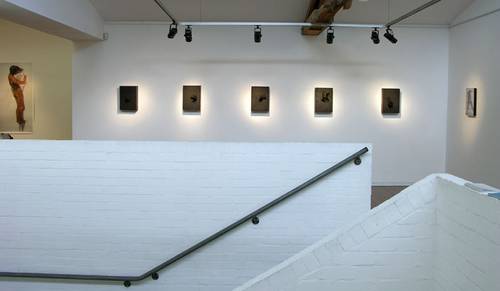 As in my previous exhibition Soft Targets, the title Fall Out can be suggestive of various interpretations or readings of the work in the show. In Soft Targets, military terminology intertwined with art history, conflating the body as target. In Fall Out, sinister connotations associated with a potential military disaster and its aftermath combine with breaking moments within Art History where convention is challenged by radical change.
Stain, a simple study of a water mark left behind by wet clothing on a wooden verandah, plays with the notion of the stained canvas innovated by artists in the 60’s such as Helen Frankenthaler and Morris Lewis. A stain suggests a trace but one which discolors and spoils. Unlike paint on a surface, a stain embodies the canvas as absorbent skin.
Unplugged, a series of silicon rubber and black oxide objects, suggest an end game reminiscent of Ad Reinhardt’s black paintings but these zero states are pulled apart, their surfaces “unplugged” to reveal parts of the body cupped by the hand; a black space that is both full and empty.
The works, Body Rub 1-6, Eraser Head 1-6 and the DVD, Mind Over Matter, link together as a suite of works that suggest the convention of the nude as a critical site within painting echoed in the work of such artists as Willem De Kooning”, Francis Bacon, Lucien Freud etc. Within this framework, Robert Rauchenberg’s work “Erased De Kooning drawing” becomes a radical challenge to the original and signals the advent of Post-Modernism. The body in these works becomes a photograph of a performance, a graphite drawing, an erased object, a trace on the surface of an Eraser Head. The DVD, Mind Over Matter, is a mock-umentary tracking these actions.
The outcome would suggest that all art, irrespective of its radical intentions, is finally only a mark in history destined to become a product for aesthetic contemplation and market exchange. Only in the process of its making can it contain a certain contingent freedom and potential for critical inquiry. The collision between process and outcome forms a tension in the work Hard Core / Soft Core. In these sculptural works, bronze and rubber elements represent direct body casts. Combining these two elements together creates a perverse connection between rigid and latent materiality. Traditionally bronze has a heroic and very classical relationship to the figure in which the fragility of human flesh escapes the ravages of time by having its movement captured in static form, while rubber, as part of the process of casting, is strangely incomplete as a material and suggestively incarnate.
Although I have emphasized the connections and playful associations to Art History in Fall Out, the exhibition is of course its own entity. The work has a physicality which finds its own voice in the strange alchemy of rubber, bronze, graphite, photography and direct body casts that emphasize the fragility and vulnerability of the body. In this sense the work “performs” the body of the artist and by association that of the viewer; these bodies both “fall out of” and “fall in to” objects and images.
Julie Rrap, February 2006

Julie Rrap has been a major figure in Australian contemporary art for over twenty years. Since the mid-1970s, she has worked with photography, painting, sculpture, performance and video in an on-going project concerned with representations of the body. In 2001, she won the Hermann’s Art Award with her digitally-altered photograph, Overstepping, in which the artist’s own feet are seen to have grown stiletto heels. Rrap was included in the important Australian Show in 1988 that toured to the Frankfurter Kunstverein in Germany and major museums in Japan. Other significant group exhibitions include Fieldwork: Australian Art 1968 – 2002 at the National Gallery of Victoria, Systems End: Contemporary Art in Australia that toured Japan and Korea in 1996 and the 1992 Biennale of Sydney. The Museum of Contemporary Art, Sydney are planning a retrospective exhibition of Rrap’s work for 2007. Julie Rrap’s works are held in every major public collection in as well as many corporate and private collections in and overseas. Fall Out will be Julie Rrap’s ninth solo exhibition with Roslyn Oxley9 Gallery.