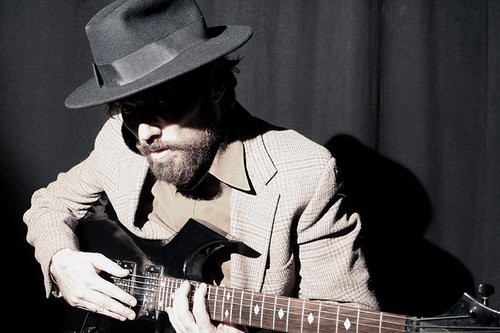 "Fantasists in the Age of Decadence"

Salon in style, TV Moore’s Fantasists in the Age of Decadence brings together an array of works: magicians and explorers, vagrants and bohemians; a Satanist and our Prime Minister; a black hole Humpty, a forgotten monument and a mysterious hand.
Each work seems singular and self-contained. However, sometimes, the idea lies in the conversation between things. The fantastic. That which escapes the edges of what the world is taken to be.
A vagabond plays his electric guitar. Thumbing an ode to a failed mission, an infinite rhythm of reverberation and return. Marking a time that cannot be captured, like the stars circling around us that forever we try to name.
Each work has its roots in history, in a story. However the familiar figures, monuments and narratives from which they draw are reanimated and reformed. They become stand-ins, transgressions, forming a sort of cultural geography, unbound by time yet grounded by imagination.
Perhaps we can find answers in flights of fancy. Nothing moves without change and nothing changes without moving off the beaten track. It is in lands we do not know, that discoveries are made.
In deep waters we fish - all comers welcome.

TV Moore (b. Australia, 1974) graduated from Sydney College of the Arts in 1999 and completed his Master of Fine Art at CalArts, Los Angeles in 2006. Since 1999 Moore has exhibited widely in solo and group exhibitions both in Australia and abroad. In 2001 Moore was selected for Primavera at the Museum of Contemporary Art, Sydney. Moore’s major ten-channel video instatalltion, The Neddy Project, was exhibited at Artspace in 2004 and was subsequently acquired by the Museum of Contemporary Art, Sydney and exhibited in full as part of MCA Collection: New Acquisitions in Context (2005). Moore has been selected for many international group exhibitions including High Tide: Currents in Contemporary Australian Art, Zacheta National Gallery of Art, Warsaw, Poland and Contemporary Art Centre, Vilnius, Lithuania (2006); the inaugural Torino Triennale, T1: The Pantagruel Syndrome, Turin Triennale (2005); City-dwelling Demons, Osaka Art Kaleidoscope at Contemporary Art Space Osaka, Japan (2005); Slow Rushes – Takes on the documentary sensibility in moving images from around Asia and the Pacific, The Contemporary Art Centre, Vilnius, Lithuania (2004); Gridlock: cities, structures, spaces, Govett-Brewster Art Gallery, New Plymouth, New Zealand (2004); and I thought I knew but I was wrong, Ssamzie Space, Seoul, South Korea and ACMI, Melbourne, an Asialink/ACMI touring exhibition (2005). Moore was the recipient of the prestigious Anne & Gordon Samstag International Visual Arts Scholarship, the 2005 Montalvo Fellowship, USA, and the Sally and Don Lucas Artist Fellowship, USA. TV Moore has been commissioned to make a major new work for the 2008 Biennale of Sydney, curated by Carolyn Christov-Bakargiev. Fantasists in the Age of Decadence is TV Moore’s fourth solo exhibiton with Roslyn Oxley9 Gallery.
www.roslynoxley9.com.au