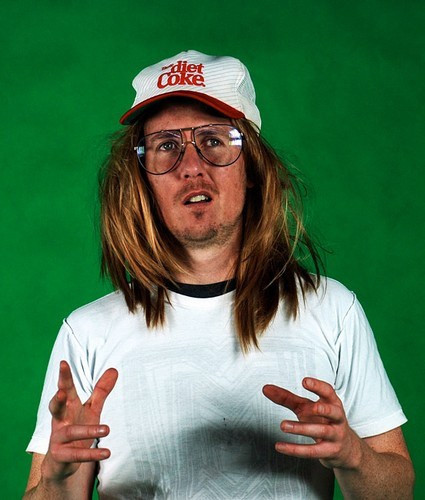 Um, my favourite game is on Wii, it’s Benton Alien Force, um, like, because you get a ... like do missions and like you can turn into aliens and beat up people like bad guys.
[...]
And it like goes to people and he’s the strongest alien. Well, it helps you do stuff, because like the null void projector which if there’s really bad aliens, like there was Vilgax which is Ben’s arch enemy, but he defeated him. Um. He, he could press the button of the null void and there is this ray and it would come out and suck them in, to the null void world. And if you took the top off and you did it and you pressed the button it would explode for half a mile, go for half a mile.
—
Google! lol!

————————–
TV Moore has harvested the bumper crop of new linguistic fruits to come from the fertile soil of online life. New words and tech abbreviations, like exotic slang, are the way by which we negotiate relationships on keyboards and on consoles. Random quotation from networking sites forms the basis of comic video and sound works. The eloquence of a child gives voice to gaming enthusiasms and expertise.

At the heart of this investigation is the suggestion that such structures fail to fully meet the desires of its users – a search for connection / an affirmation of existence / a transcendence of ‘self’. A tension is formed between the virtual and the real.

From this a Bribie Island-era Ian Fairweather emerges as a figure that raises the question, how can we ‘escape’ in such a connected world?

TV Moore holds a Master of Fine Arts from Calarts, Los Angeles. He has been exhibiting internationally since 2003. Group exhibitions include The 16th Biennale of Sydney (2008), The Busan Biennale (2008), The Inaugural Turin Triennale T1 - The Pantagruel Syndrome at the Castello Di Rivoli, curated by Caroline Christov-Bakargiev and Francesco Bonami (2005), City Dwelling Demons at the Contemporary Art space Osaka (2005). He was the winner of the 2009 Anne Landa Award at the Art Gallery of New South Wales. He was the recipient of the prestigious Samstag International Visual Art Scholarship as well as the Don Lucas Art Fellowship USA. This is TV Moore’s fifth solo exhibition with Roslyn Oxley9 Gallery.
www.roslynoxley9.com.au