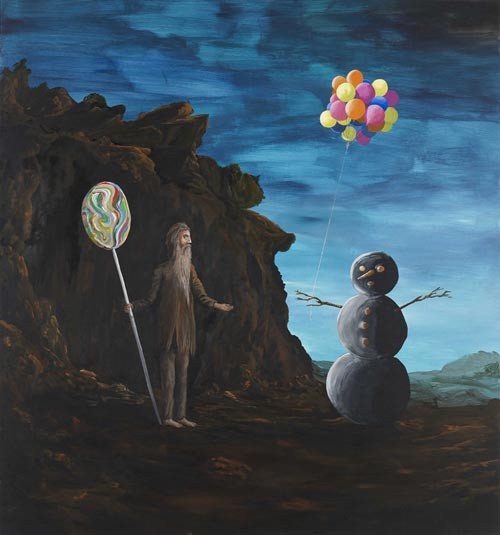 Myths and the doubts behind them are the central theme of the paintings of the Serbian artist Djordje Ozbolt (*1967). He devotes himself to this classical theme with a perfect blend of subtle form and satirical content. He draws his inspiration from a whole diversity of media: images, stories and experiences merge in a fusion of techniques and styles to become surreal worlds full of the blackest humour. A typical example is the painting “Koksen” (2010), which cites the self-portrait “Mousquetaire à la pipe” (1968), in which Picasso depicts himself in the role of the dashing musketeer enjoying life and love to the full. Ozbolt’s painting vaguely hints at a man’s moustached face wearing a hat and smoking a cigarette, the transparent composition being held together by lines, patches of colour and circles and hardly showing any profile. With this critical yet humorous homage Ozbolt calls in question not only the mythologization of the artist but also the way painting deals with its own history.

Djordje Ozbolt, born in Belgrade in 1967, studied architecture at the University of Belgrade from 1988 to 1991 and has been living in London since the mid-1990s, where he studied painting at the Slade School of Fine Art and the Royal Academy.
His paintings were shown in a group exhibition at the Rüdiger Schöttle Gallery in 2006, the year in which he also took part in the “Tate Triennial” at Tate Britain. Further group exhibitions included the “Prague Biennial”, Prague, Czech Republic (2007) and “The Library Of Babel / In And Out Of Place”, 176 Zabludowicz Collection, London (2010).
www.galerie-ruediger-schoettle.de