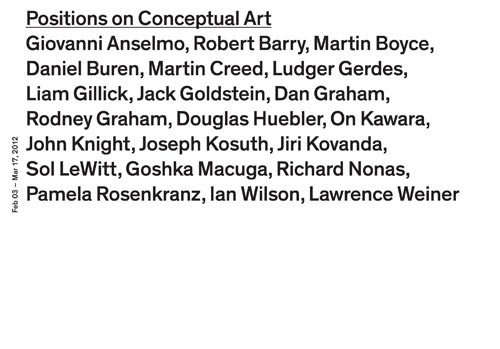 The term Concept Art was first used at the beginning of the 1960s in the context of American modern art for the kind of art that essentially operates with language to express an idea. One of its chief exponents was the American artist Sol LeWitt, whose use of texts in his work led to the widespread use of the term Conceptual Art to describe an art movement for which the idea, the concept, is more important than the work itself. Indeed, the execution of the artwork is subordinate to the idea and need not even be undertaken by the artist himself. In many cases the work merely consists of models, sketches, texts and instructions in lieu of the actually executed artwork, thus transcending the work’s physical, material presence still further.

Consequently, with little else to distract him, the viewer’s attention focuses on the artist himself and his thoughts and ideas.

The communication of Conceptual Art has been one of the main activities of the Rüdiger Schöttle Gallery since the 1970s. Thus it is that the exhibition Positions on Conceptual Art now takes up one of the gallery’s fundamental objectives. It will show not only works by the leading exponents of the first generation, such as Robert Barry, Dan Graham, Douglas Huebler, On Kawara, Joseph Kosuth, Lawrence Weiner, but also works by important Conceptualists of the following generations, including Martin Boyce, Martin Creed, Liam Gillick and Goshka Macuga, to name only a few.

Besides illuminating a longstanding aspect of the gallery’s activities, the exhibition’s main objective is to highlight the enduring and central significance of Conceptual Art within the context of contemporary art and its history.
www.galerie-ruediger-schoettle.de