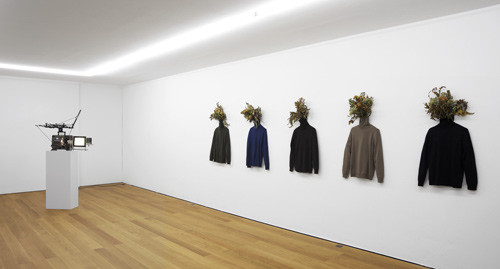 Exhibiting at the same time on the ground floor will be the Canadian artist Tim Lee and the New York-based artist Anicka Yi.

Born in Seoul in 1975, Tim Lee lives and works in Vancouver. His films, videos and photographs have as their theme the ambivalent relationship between ethnicity, nationalism, art history and regional folklore, a subject matter the artist often treats with plenty of humour, though never without insight. With the aid of such stylistic devices as splitting and doubling, twisting and reversing, Tim Lee succeeds in making the viewer perceive things not just in terms of their form but also question them in terms of their content. Is what we see perhaps not what we think we see? On the invitation of Jens Hoffmann and Adriano Pedrosa, Tim Lee recently exhibited at the 12th International Istanbul Biennial. In 2009/10 he was a Guest of the DAAD's Berlin Artists-in-Residence Programme. His work was shown in a solo exhibition at London’s Hayward Gallery in 2009.

Anicka Yi, born in 1971, likewise in Seoul, lives and works in New York. A row of colourful roll-necked sweaters hang from clothes hangers on the wall. Deep-fried flowers grow out of their collars. An aggressive treatment of tactility- surface textures, simultaneously inviting and repelling touch, smell. The connections between materials and materialism, states of perishability and their relationship to meaning and value, consumerist digestion and cultural metabolism are questions that emerge. By exploring tactility, sensorial, political, identity-like statements of biological metaphor, memory machine Yi attempts to develop a new language from an expanded notion of the sensorial. Her participation in the exhibition at the Rüdiger Schöttle Gallery is the first showing of her work in Germany.
www.galerie-ruediger-schoettle.de