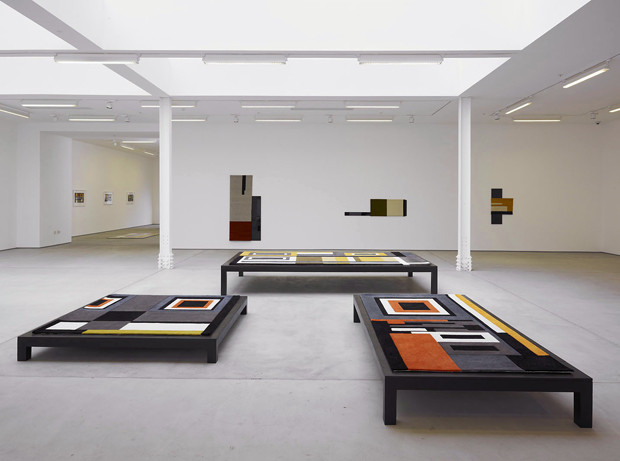 Zittel’s differently executed surfaces – woven, painted, or sculptural – evoke manifold types of physical field, including canvases, walls, floors, furnishings. They also offer metaphors for the multifarious ‘planes’ of human experience. These latest planar works reflect the artist’s enduring interest in the porous boundaries between distinct modes or genres – whether abstraction and figuration, or the decorative and the functional. Rather than seeking to deconstruct categories and taxonomies,

Zittel adopts a strategy of careful syncretism: she asserts the importance of categories, pointing to their vital role in assigning psychological and social meaning to things. Like Venn diagrams, then, her works roll together diverse concepts (relating variously to art and life) while asserting the necessary divisions between them.

Planar Pavilion revolves around a free-standing architectural structure composed of rectangular planes.
Variegated in texture and colour, these surfaces function – like proverbial ‘blank canvases’ – as open-ended and amorphous sites. While interlocking physically, they also slip between myriad associations and resonances. As a three-dimensional matrix, the structure echoes both Constructivist sculpture and – in its juxtaposition of metal and wood – the sleek and simple finishes of post-war interior design.

Mirroring the structure’s planar composition are seven hand-woven textiles, and one carpet suspended on the gallery’s walls. These are similarly cross-disciplinary – operating as paintings, sculptures, textiles and functional objects. Their woven segments connote artisanship and handcraft, while the sheet metal stands for mass manufacturing. Zittel teases apart the concept of a ‘picture plane’ by offsetting floor and wall-based pieces, invoking both the verticality of paintings and the horizontality of carpets. Through this doubleness – a straddling of ‘art’ and ‘life’ – the works reflect something of contemporary culture’s double-edged attraction to consumable art objects – our simultaneous desire for beautiful objects with which we can intimately engage on a day-to-day level, and, on the other hand, for objects that are charged with the authority of art history and ideology. Also on show is a series of gouache and watercolour studies for these rectangular fields. The works on paper both represent planes and, as sections of paper, constitute planes per se.

This defining quality of Zittel’s art arises from its proximity to her wider existence. Over the last twenty years she has used the articles of day-to-day life – food, furniture, clothing, shelter – as the basis for her work. Her practice, she explains, “plays out through the act of daily living, and examines how psychological str uctures, belief systems, social values, and rules are manifested as physical objects that we create around ourselves.” Accordingly, her new planar compositions enact a philosophy of real-life objects and their associated rituals (from table tops to paper to sports fields – all sites of human interaction, physical or psychological).

In a series of works titled Bench (After Judd), Zittel pays tribute to Donald Judd’s Bench series, structures that she has long been fascinated with because their ability to confuse the role of the horizontal surface – functioning at once as benches, tables and raised ‘flooring’. The Hard Carpet series meanwhile presents sheet metal “carpets” which nod to the floor sculptures of Carl Andre, works which similarly collapse the sp ace between viewing and experiencing. By conflating different kinds of domestic surface, Zittel produces multivocal objects. Their tactile surfaces, intricate facture and conceptual allusiveness range far beyond Minimalism.
Indeed, Zittel pulls from a panoramic range historical precedents. Her act of turning the every-day into artistic practice, from Allan Kaprow’s treatise of “performing life,” to the diagrammatic forms of the Bauhaus school, whose combination of art, craft, design and architecture prefigures her own multifaceted output.