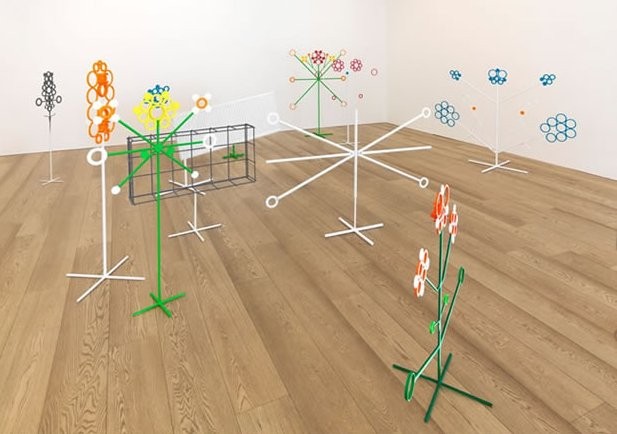 Andreas Slominski‟s latest show at Sadie Coles HQ centres on a new series of sculptures of flowers. The show‟s truncated or „broken‟ title, Europ, alludes obliquely to the financial cuts and the economic and social unrest around Europe, for which the plucked, fragmentary flowers serve as metaphors. Wrought from metal, the sculptures also replicate the stylised, planar latticework of garden ornaments, evoking miniature windmills or weathervanes. Diverging and intersecting struts support floral clusters of circles which variously recall fractals, molecular diagrams or magnified snowflakes – as the curator Massimiliano Gioni has written of Slominksi‟s work, “The basic principle of his art seems to be an inversion of any minimalist credo. There is no „Less is More‟ in Slominski‟s universe.”
Earlier works by Slominski have frequently included references to the romantic pastoral, in the form of windmills, cuckoo clocks, old boots, or fake trees. For a 1996 show at Portikus, Frankfurt, he created a village of doll‟s house-sized windmills which alternated between naturalistic replicas and cartoonish cardboard cut-outs, anticipating the Arcadian subject matter of these latest works. Yet in tandem with the flowers‟ whimsical strain, the works are rigidly symmetrical and pictographic. Some incorporate diagonal crosses which suggest national flags or heraldic emblems, others echo crucifixes. Mirroring the abrupt abbreviation of the show‟s title, the free-standing works are like national or ideological symbols which have been deposed and have become ridden with ambiguity. Indeed, the flower sculptures share the ambiguous tenor of Slominski‟s celebrated trap sculptures, a mainstay of his work since the mid 1980s, seeming by turns playful, austerely mechanical, or variously symbolic. In terms of their construction, they also relate to the welded metal sculptures Slominski has made, for example the abstract assemblage Sculpture Welded Under Water (2006), which incorporates a rusty anchor amalgamated into the sculpture while it was still submerged.
Since around 2006, Slominski has been producing polystyrene paintings formed out of chiselled and layered slabs of polystyrene whose surfaces are populated by multifarious figures, decorative motifs, cartoonish doodles, and fragments of text. The artist‟s most recent work includes high-heeled shoes and a handbag carved from polystyrene, spray-painted in a range of garish colours to create knowingly impractical objects which themselves vaguely mimic strewn flowers or Christmas decorations. These works therefore form an eloquent footnote to the flower sculptures, mirroring their combination of kitsch artifice and highly exacting facture.
For over twenty years Slominski has developed an eclectic and subtly interrelated corpus which repeatedly defies recognition, alternately drawing upon everyday objects or experiences and escaping into a quixotic realm of personal motifs, and oscillating between found objects and handcraft. Dualities reside in many individual works; a sea-green alarm bell bearing the bald injunction „PUSH‟ appeals to the viewer to animate or activate it, while seeming like the expropriated, defunct remnant of some displaced, unknowable reality. In a recent series, the artist has hung garage doors on the gallery walls to suggest dead-ends or false exits as well as abstract paintings. The poet Durs Grunbein appositely observes that “Slominski‟s strategy is to make reparations to that which has been repressed (in history and landscape, craft and lifestyle) by concentrating on that which has been cast aside, the inconspicuous, even the strange.”
Andreas Slominski (b. 1959, Meppen, Germany) has exhibited internationally, with recent major exhibitions including „X Rated‟, me Collectors Room, Berlin (2011, a show which also included works by William N. Copley); Sammlung Goetz, Munich, Germamy (2010); Museum Boijmans Van Beuningen, Rotterdam, Netherlands (2007); MMK Frankfurt, Germany (2006); Serpentine Gallery, London (2005); Fondazione Prada, Milan (2003); and German Guggenheim, Berlin (1999). Recent group exhibitions include „The Last First Decade‟, Ellipse Foundation Contemporary Art Collection, Cascais, Portugal (2011); „Moby Dick,‟ CCA Wattis Institute for Contemporary Art, San Francisco; and „Vertrautes Terrain: Contemporary Art in & about Germany,‟ ZKM Center for Art and Media, Karlsruhe (2008). Andreas Slominski lives and works in Cologne.
www.sadiecoles.com