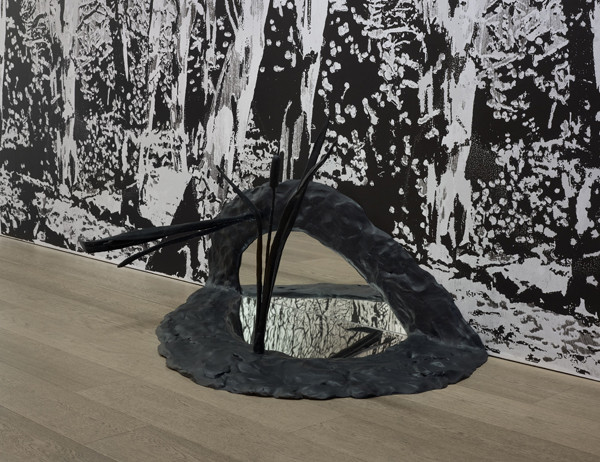 In January 2013, Sadie Coles HQ presents Untitled, an exhibition of works by Angus Fairhurst (1966-2008). The concept of ‘undoing’ pervaded Fairhurst’s art – absence was an ever-present motif. Words such as ‘unwritten’, ‘undone’, and ‘untouched’ formed many of his titles. This exhibition, Un-titled, paraphrases these terms of negation and reversal. Encompassing a variety
of media including sculpture, painting, collage and photography, the exhibition brings to the fore the cycles and oppositions that were at the core of his thinking – doing and undoing, absence and presence, thinking and feeling.
The gallery is wallpapered with black-and-white imagery from Fairhurst’s 1998 series of thirty silkscreen paintings, Underdone / Overdone. Executed in different combinations of prime colours, these were based on black-and-white photographs of thickets in Epping Forest. Three examples of the silkscreened Underdone / Overdone paintings which used the black-and-white images as a departure demonstrate the conflict between Fairhurst’s pastoral imagery and his tendency towards abstraction. He repeated the woodland imagery in increasing layers throughout the series, moving from recognisable depictions of crisscrossing trees to near-abstract accumulations of thick colour.
The rural subject matter is reflected (literally and thematically) in three mirrored sculptures of ponds, Untouched (2004), Unseen (2004) and Unwit (2006), whose mottled black banks and sparse rushes were originally modelled in clay and subsequently cast in bronze or bioresin. Implying pristineness, seclusion and oblivion in their titles, the works collectively suggest a kind of unbounded pastoral hinterland. Another work made in the same period, The Birth of Consistency (2004), showed a gorilla – one of the recurring motifs of Fairhurst’s work – contemplating itself in a similar mirrored pool and wrenching the reflective surface towards itself. These unpopulated versions glance more obliquely at the classical myth of Narcissus and closely ‘reflect’ one another formally: Unwit serves as a comic metaphor for the self-reflexive artwork folding in on itself.
The theme of nature reappears in two large-scale newspaper collages, Unwritten (January 18th 2002) and Unwritten (January 29th 2002), consisting of newspaper front pages gathered on the days referenced in the titles, and assembled in grids. Images and text have been systematically redacted or ‘unwritten’, suggesting a minimalist precept of formulaic repetition. This is offset by the circular garlands of flowers which Fairhurst drew across each grid, injecting a non-mechanical note of romanticism.

Angus Fairhurst (1966-2008) was one of the influential members of the group of artists associated with London’s Goldsmiths College in the late 1980s. He participated in the seminal exhibition, Freeze (1988), which set the tone for contemporary art in the UK over the next two decades. Fairhurst graduated from Goldsmiths College in London in 1989. Following Freeze, he exhibited in most of the landmark group exhibitions of his generation, including Gambler (1991) at Building One, London, Brilliant at the Walker Art Centre, Minneapolis (1995), Some Went Mad, Some Ran Away at the Serpentine (1994), Apocalypse at the Royal Academy, London (2000), Casino 2001 at SMAK, Ghent (2001), and In-a-Gadda-da-Vida, with Sarah Lucas and Damien Hirst, at Tate Britain, London (2004). Music performances by Fairhurst’s band, originally called Low Expectations, took place at an international range of venues from 1995-2001.
From 2009-11, a touring retrospective of his work travelled between Arnolfini, Bristol; Waddesdon Manor, Buckinghamshire; M Museum, Leuven, Belgium; and Westfälischer Kunstverein, Muenster, Germany. A Couple of Differences Between Thinking and Feeling (2003) is on view at Great St Helen’s Sculpture Space, London, until July 31, 2013.
www.sadiecoles.com