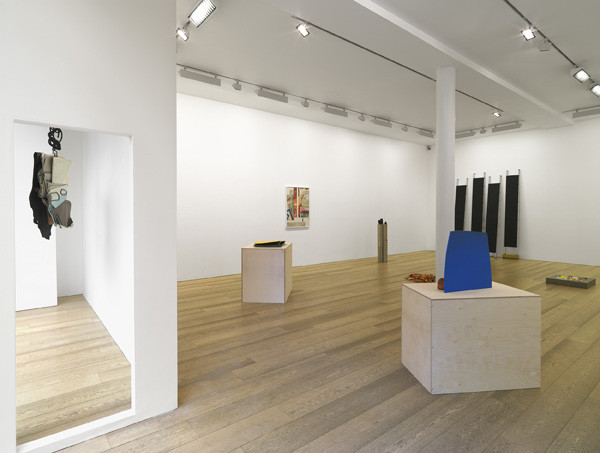 Sadie Coles HQ is delighted to present APRIL, an exhibition featuring works by four emergent artists from America and Europe. Their works share an underlying interest in appropriation and found objects (whether physical or virtual), at the same time as evidencing distinctive methodologies and voices.
In her archival pigment prints, Michele Abeles uses Photoshop to assemble fragmentary pictures, digital cyphers and free-floating numbers into unexpectedly sensuous compositions. The dense composites are analogous to the three-dimensional assemblages which Abeles builds and photographs in her studio (incorporating items such as wine bottles, terracotta pots, newspapers and printed fabrics, often in conjunction with nude models). Simultaneously, they echo the arbitrary syntheses produced by Internet searches. In Reverse Wallpaper (2012),digital imagery is superimposed by clear acetate, which in turn is overlaid by yellow drips tracing the shapes of windows on a computer screen. The underlying imagery (equivalent to computer wallpaper) shows through these spectral lines, producing an ambiguity between ‘background’ and ‘foreground’. Michele Abeles (b.1977, New York) studied at Yale University; she lives in New York.
The simple arrangements of Adriano Costa’s sculptures – on the one hand invoking Arte Povera or Nouveau Réalisme – belie their panoramic geographical and historical scope. KEEP IN MIND IT'S JUST AN EASY GAME (2012), a striped textile laid out with pebble-sized clods dotted across it, is revealed to be an “alpaca andina carpet bought from a shaman from La Paz, Bolivia”, overlaid with balls of argila (naturally occurring clay used for modelling) cast in bronze. Allusions to Minimalist floor sculptures or stripe paintings intersect with echoes of more arcane traditions. Yet the title also wryly resists overlyintricate interpretations. Costa’s work alternately upholds and erodes the distinction between art and non-art. Adriano Costa (b. 1975, Sao Paulo) studied at ECA-Universidade São Paulo, Sao Paulo, where he lives and works.
Harnessing materials as diverse as latex, wood, neon, aluminium and paint, Kostas Sahpazis tests the potential for familiar materials and items to be reconfigured into ‘abstract’ assemblages with richly variegated surfaces. In Merged Down (2013) a bundle of paper and leather has been trussed up and suspended from the ceiling. In its spatial and volumetric complexity, the work looks back to a variety of abstract sculptures from the twentieth century. But we find various figurative allusions – the overall assemblage has a casually anthropomorphic quality – together with a residual sense of the components’ usual associations. Precariously held in place by buckled metal clasps, the crumpled paper and leather resemble manuscripts. Sahpazis at the same time undercuts typical connotations: the typically glamorous stuff of patent leather is made awkward and desultory. Kostas Sahpazis (b. 1977, Thessaloniki) lives in Athens; he studied at the School of Fine Arts, Athens, and the Weisensee Kunsthochschule, Berlin.
Jordan Wolfson’s practice in the past ten years has included video, film, installation, performance, print and photography. Since 2009 he has focused on an ambitious series of animations that could be considered a trilogy, Con Leche (2009), Animation Masks (2011), and Raspberry Poser (2012).
Presented here is Con Leche, in which an army of cartoon Diet Coke bottles filled with milk parade across an empty city (real-life footage of Detroit), slopping their contents as they stroll. Installed in a darkened space which recreates the immersive 'black box' of a picture house, the video brims with cinematic references: the bottles imply an homage to the dancing brooms of Disney's Fantasia. Wolfson also injects elements of documentary, advertising and music video, exposing the stylistic foibles and formulae of each. The scopophilic focus on the milk bottles, initially suggestive of advertising, begins to evoke the roving camera of pornography. The soundtrack is likewise a hybrid which produces continual changes of 'footing': a female actor recites texts lifted from the internet, while Wolfson interrupts her with his own directions, adding distortion to the already distorted world presented and unravelled in Con Leche. Jordan Wolfson (b. 1980, New York) lives in New York and Berlin; he studied at the Rhode Island School of Design, Providence.
www.sadiecoles.com