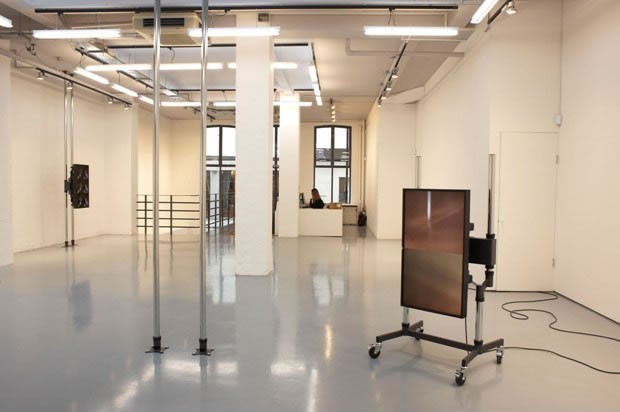 In her latest exhibition at Sadie Coles, Hilary Lloyd presents five new works which survey a range of subjects – photographed figures, architectural structures, a silhouetted head – in a variety of splitscreen formats and abutted projections. Lloyd gives special prominence to technical equipment and the architecture of the space, with the suspended monitors, projectors and DVD players taking on a concrete sculptural quality that stands in counterpoint to the films’ elusive and fleeting subjects.
On the ground floor are four works presented on monitors. In Building, two tiered screens are each split into grids of 21 separate frames. While the majority of shots are trained on a white overcast sky, random clusters swing momentarily to glimpse at a domed tower, so that multiple images of the building bounce up and down. Bridge again adopts a diptych form in which twin monitors each present two videos shot on a bridge. One clip shows a car roaring past, filmed obliquely from above, its noise combining with the clicking camera to create a metronomic, ‘techno’ soundtrack which permeates the exhibition. Elsewhere, the camera pans and swivels gyroscopically over the bridge’s girders and cables, a light-dappled segment of road, and the waterway beyond.
Ceiling comprises three identical shots of a darkened head lurching towards the camera in front of a pitched ceiling. Fractionally misaligned, the videos produce a clicking similar to the sound of electrical sparks. The repeated triangular forms of the roof combine into a Modernist-style pattern of zigzagging panes and beams, while the head – featureless and multiplied – calls to mind abstract forms such as the repeated black orbs of Robert Motherwell’s series of paintings Elegy to the Spanish Republic. Ceiling also conjures cinematic parallels: the movement of the head evokes the ‘dolly zoom’ made famous by Hitchcock’s Vertigo.
In Sunglasses, two vertically-orientated, split-screen monitors present videos of a photograph (perhaps from a fashion magazine) of a man wearing sunglasses. Against a stream of photographic clicks, the camera alternately hovers over the image – drawing our attention to the scores on the surface of the page and the moats floating above it – and veers away like a rotating advert in fast-forward. In a further revelation of the photograph’s artifice, the shot periodically jolts to reveal fragment of overlying text or underlying floorboard. Downstairs, Striped Man takes the form of projections butted up against each other in blocks of two and three, making one linear projection and – on an opposite wall – a u-shaped projection. In contrast to the dynamic movement of the videos upstairs, this work is silent, lingering and almost louche in its voyeurism. Throughout, Lloyd’s choreographic use of the camera is at odds with the seeming mundanity of her subject matter. Her works mirror the processes of vision – whether the erratic swerving of the eye or the intensity of the gaze – at the same time as impacting physically on the architecture of the space.
Hilary Lloyd (b. 1964) lives and works in London. She has been nominated for this year’s Turner Prize for her exhibition at Raven Row, London (2010), and her work is on display at BALTIC Centre for Contemporary Art, Gateshead (until 8th January). Other solo shows include Artists Space, New York (2011); Tramway, Glasgow, UK (2009); Le Consortium, Dijon, France (2009); Kunstverein München, Münich, Germany (2006); Waiters, Henry Moore Foundation Contemporary Projects, Venice Biennale, Venice, Italy (2003); Kino der Dekonstruktion, Frankfurter Kunstverein, Frankfurt, Germany (2000); Chisenhale Gallery, London (1999). Group shows include Un'Espressione Geografica (A Geographical Expression), curated by Francesco Bonami, Fondazione Sandretto Re Rebaudengo, Turin, Italy; Little Theatre of Gestures, Museum für Gegenwartskunst, Basel, Switzerland, 2009; Dispersion, ICA, London, 2008; and Art Sheffield 08. In 2012 she has a major solo exhibition at Museum für Gegenwartskunst, Basel, Switzerland.
www.sadiecoles.com