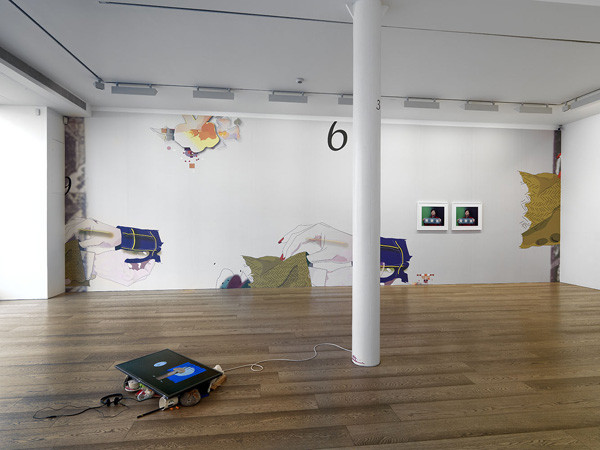 From March 2012, Sadie Coles HQ presents a group show, March, which brings together works by Uri Aran, Shannon Ebner, Annette Kelm, Helen Marten and Eddie Peake. These five artists work in an eclectic range of media – from painting and sculpture to video and photography.

Uri Aran’s works often assemble everyday objects into deceptively casual ‘still lives’. Two sculptures titled Untitled (2012) evoke the ephemera of a studio. In one, paint tubes and sections of cardboard are juxtaposed with framed drawings and an abstract wall painting. Yet a thread of formal continuity runs through the apparently random assemblage the items incorporate circular forms – combining into a semi-abstract scheme of ellipses and spheres. A sense of accumulated memories emerges from Aran’s seemingly random accumulations, such as an old tool packet onto which a photograph of a boy’s face has been collaged.

Shannon Ebner’s works for this exhibition explore graphic language through signs that are both found and constructed. In the triptych Symbolic Command Signals No. 1, 2 & 3 (2009), Ebner combines three large-scale photographs of pedestrian-crossing signals, lit and unlit. In these closely-cropped images, the ubiquitous municipal signals are isolated and magnified to expose a ‘misprint’. While the purpose of these signs is to direct us when to walk or not walk, Ebner’s images depict one sign at three consecutive intervals in which graphic symbols accidentally overlap and morph into ‘walk’ and ‘don’t walk’ at the same time. Ebner’s sculpture Y (2007 – 2012) is a large letter ‘Y’ held in place by one pin and two hinges. This piece was first conceived of in 2007 and sat in the artist’s studio as a prototype for five years –unable to be exhibited and unable to be put away. It was only recently that the piece was completed through the addition of a ‘thought bubble’. Y is similar to monumental ampersands Ebner has previously exhibited in that its presence in the world asks a rhetorical question of itself and the environment that it is placed within.

Annette Kelm’s works quote and subvert the conventions of portraiture or landscape photography. Anna #2 (2011) comprises two identical photographs (taken using an analogue camera) of a woman holding a strip of fabric decorated with stars. The composition itself draws together a range of emblematic signposts and cues –from the air stewardess-style suit worn by ‘Anna’ to the green background which recalls the vivid designs of corporate brochures – while resisting straightforward meaning. The anonymity of the subject and the ambiguity of the banner suggest a ‘character in search of a narrative’, unshackled from context or signification.

Helen Marten’s animated video Dust and Piranhas (2011) is narrated primarily by a pair of anthropomorphic columns – one white classical Doric, the other wooden, inflated and postmodern. These protagonists guide us through a wavering commentary of jokiness and polemic, with Marten setting forth a sequence of loaded and hybridised images (cultural motifs or “viral markers” in the repeating forms of a bone, a plinth and a bush). A voiceover quotes the architect Ettore Sottsass’s musing, “I never have understood why wars are arranged and declared from marvellous white palaces set in the middle of green lawns” – which aptly mirrors Marten’s desire to unravel the physical and causative components of everyday stuff. Wallpaper installed in the upstairs gallery unfolds at the scale of a billboard. Graphically cropped and pictographic, the fragmented images of hands tugging at fabric repeat across the expanse of the wall. Seductive in the same way as packaging (and with the same compressed dishonesty of the video) the wallpaper flattens civic and emotional signs into friction with optical diagram and catastrophe.

Eddie Peake’s art employs painting, sculpture, photography and performance. In two large paintings, fluorescent spray painting has been interrupted by the phantasmal shapes of plastic bags and scarves (the objects were used as stencils around which paint was sprayed). The silhouetted blanks are arranged in the shapes of smiley faces, calling to mind ‘text symbols’ constructed from punctuation marks, or the smiley face emblem of 1980s and 1990s dance culture. Peake’s text-based paintings again integrate abstract spray painting and computerised forms in palimpsest-like layers. “Erections” is blazoned in mirrored letters (stencilled from sections of tape, while recalling letters drawn using a computer) across a luminous scheme of swirling paint and rainbow stripes, typifying the brash note of camp which runs through much of the artist’s work.