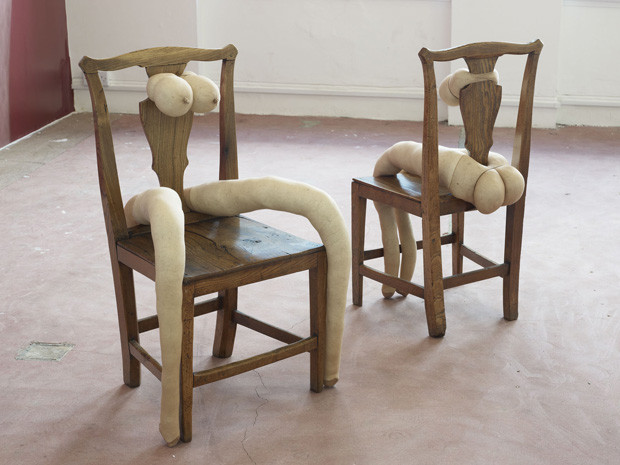 In February 2012, Situation, a new gallery at 4 New Burlington Place, will open. Devoted to the work of Sarah Lucas, Situation will present new installations in February, May, August and November 2012, alongside an organic programme of events directed by the artist. The extended displays will include works both new and historical, mainly by Sarah Lucas and occasionally involving other artists.
The opening exhibition will include a new sculpture by Lucas incorporating her signature use of everyday materials such as concrete, underwear, and found domestic objects. Through a combination of sturdy and fragile elements, and of grounded and suspended forms, the work overlays an emblematic representation of the body with reference to ancient myth.Situation channels the spirit of the artist-led exhibitions of the late 1980s and 1990s with which Lucas and her contemporaries launched their careers. Sarah Lucas has long made new work in specific, sometimes remote and unusual locations, places which have engaged her interest and sparked a development in her sculpture. Situation will bring some of this work home, and then mix it up with older, rarely-seen sculpture or work by artists with whom she has a strong affinity.
To coincide with the new gallery, Sadie Coles HQ will publish a book documenting Lucas’s work from 2005 (the end-date of her existing catalogue raisonné) to the present, titled After 2005, Before 2012. Sadie Coles HQ continues to operate a programme in the galleries at 69 South Audley Street and 4 New Burlington Place, as well as periodic off-site projects presenting artists’ work in a variety of locations throughout London. Sarah Lucas is working on a project in Mexico City with Kurimanzutto for April 2012 and Ordinary Things, a solo survey exhibition, will open at Henry Moore Institute in July.
www.sadiecoles.com