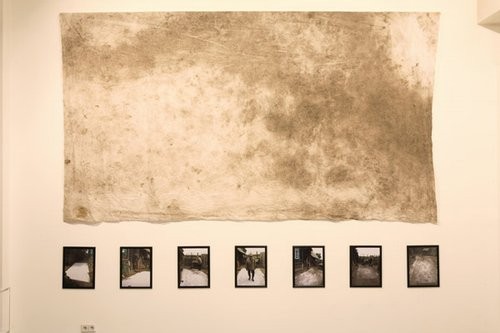 If the sky covering the Earth is an unequivocally idealistic symbol of hope, then the Earth itself is, on the one hand, a symbol of the inescapable destiny, and on the other - the foundation of material existence: the dirt under one’s feet, fertile humus, construction matter, inexhaustible remainder, and material memory. The subject of the Earth is universal, and at the same time simple and concrete like a lump of clay. For the young artists Andrey Kuzkin and Haim Sokol who have already made an impression during the I Moscow International Biennale for Young Art «Qui vive?», the Earth is, above all, memory made matter. However, this is where the coincidences of their individual ways of approaching the subject come to an end.
Andrey Kuzkin’s work for this Stella Art Foundation project are based on the documentation of his performances. In other words, they are, in and of themselves, a form of materialized memory. The first performance (“Traces”) took place in 2006 in the Pustyn village of the Ivanovo region, where the artist covered a part of the nearby yard with white cloth in such a way that the inhabitants had no choice but to make it dirty with their feet. So that now, two years later, his canvas, together with photographs of the people who had left their traces on it, has assumed the aspect of an altar of the cult of daily routine as it extends into eternity. The second performance (“Round and Round”), presented as a video projection, was organized last summer in the Veretyevo art-camp. Kuzkin circled around a platform that had just been covered with a fresh layer of concrete for as long as he was still capable of moving onward in the thickening mass. Amorphous matter eventually emerged victorious, but the hero had by then eternalized the trajectory of his motion in it.
“Round and Round”, in comparison with “Traces”, demonstrates the strengthening of individualistic and symbolic accents. Anonymous action is replaced by the author’s presence, chaotic dynamics - by the archetypical geometry of a circle, the “documental” facet of the event - by efficient directing, natural and neutral material (earth as soil) - by the artificial and clearly expressive (concrete). And if the Earth itself left traces (self-imprinted) on the canvass in the first case, in the other case concrete sucks the author-participant in, lending his trace an aspect of sculptural fundamentality.
It is ever important in this work by Kuzkin that the artistic work itself is done by the feet, that is to say the part of the body that is in constant contact with the Earth. However, as he stands firm on the ground, man can only point to the sky with his hand. Only to point, since physical contact is impossible here. And a pointing gesture brings us into the order of symbolic figures, the primary form of language that serves as a way of telling other people (the audience) about what one has witnessed with one’s own eyes. This gesture transforms the act of individual cognition into an act of interpersonal communication and, in the case of art, also an artistic device. It is precisely this kind of replacing of a direct action (physical motion) by an indirect one, an artistic device (gesture-looking) that Haim Sokol achieves in his work. He, however, accomplishes this not by looking or pointing from the ground (Earth) towards the sky, but from the sky towards the Earth (he was inspired by the perspective that opens up when one looks out of a plane window). Thus, his audience assumes, together with the artist, the position of a “divine view” that is only theoretically available to somebody standing on the ground. That is to say, as either memory or reflexivity.
Sokol’s series “God Knows Where” consists of a set of “mock-ups” that represent fragments of the surface of the Earth, made out of rusty tin plate and contained within plastic boxes. The rust corrodes the metal, returning it into an element of the earth, whereas wretched little human figures, along with their houses and their goods and chattels are illuminated, as if at night, by the scanty light of electric bulbs fixed in the plastic “heavens”. This evening Earth is a sad thing to look at. Sad like memory that consistently loses details of the overall picture until it dissolves into nothing. Sad, too, like human history that is ultimately visible only to the archeologist that digs its particles out from the earth, in order to reconstruct fragments of the past and re-create it as mock-ups. However, unlike the archeologist who brings the past back into the present, Haim Sokol shows the past as past itself: as an unreachable geography and a weakening memory. His miserable “rusting earth” seems to be an auxiliary of both time and death that delete all traces - even the few that the second participant of the project hopes to preserve.