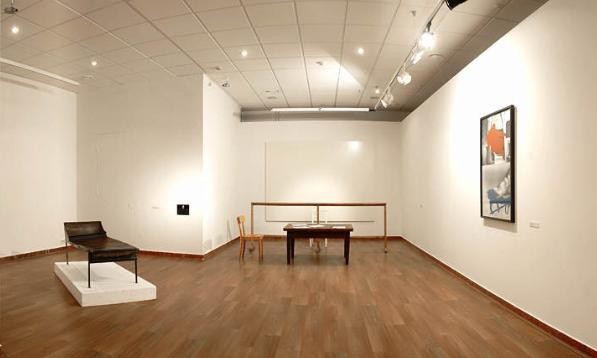 The Sigmund Freud Museum – Contemporary Art Collection was opened in Vienna on 21. November 1997. The beginning of this enterprise started in 1989 when Joseph Kosuth realised in the Freud Museum his work „Zero & Not“. After that he started together with curator Peter Pakesch and director of the Freud Museum Ingrid Scholz – Strasser to invite selected artists to make a contribution to this collection. Focussing on the theme : psychoanalysis and art. It hosts now a group of 13 works by artists like Joseph Kosuth, Ilya Kabakov, John Baldessari, Jenny Holzer and others. The main task of this collection is to show how Freudґs thoughts found its way into the processes of artistic creation. Psychoanalytic theory has influenced the visual arts at least from the time of Surrealism on. We just have to think of the collages by Max Ernst or the programmes sketched by Andre Breton. The now presented works demonstrate how this concept still challenges artists from different backgrounds.
The idea to build this collection was also to start a network between the Sigmund Freud Museum Vienna and the artistic field. So that this space would not only be a place for scientific research, collection and documentation but also a place of debate on the reality and influence of the insights with which Sigmund Freud founded the concept of psychoanalysis.
The Contemporary Art Collection of the Freud Museum Vienna hosts now works by : Georg Herold, Joseph Kosuth, John Baldessari, Jessica Diamond, Marc Goethals, Ilya Kabakov, Heimo Zobernig, Haim Steinbach, Franz West, Clegg & Guttmann, Jenny Holzer, Pierpaolo Calzolari and Sherrie Levine.
Stella Art Foundation desires to open a new page in Moscow art life by staging the show of the best works from Sigmund Freud Museum. The combination of philosophical ideas that irrevocably changed human life and thought in XX century and investigtions of the frontier of art and mind couldn’t but meet. And in Russia their meeting is fixed for he first time.
The press-conference will take place on February, 22 at 5 p.m, Skaryatisky pereulok, 7
The opening of the exhibition will take place on February, 22 at 7 p.m., Skaryatisky pereulok, 7
The exhibition runs from February, 22 till May, 15, 2007, 10.30 a.m.-6.30 p.m. every day, except Monday.
www.safmuseum.org