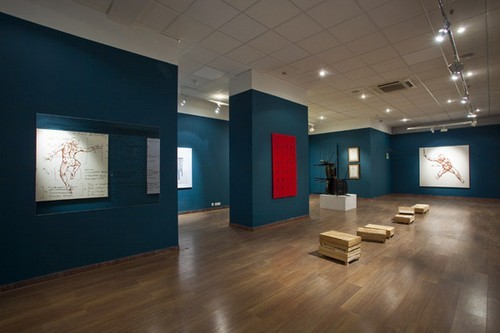 The project by Yuri Albert, Victor Skersis and Andrey Filippov (the so-called 'Cupidon' group) featuring at both Stella Art's exhibition sites, is dedicated to one of the fundamental problems of the visual art. It is a problem of the interaction between the visible and the intelligible, the form and the content, or, to use the authors' own expression, the way an artist shows things and, thus, tells about them. As Albert, Skersis and Filippov write in their explanatory text, "Different artists give different answers to the question: 'What is art?' For an icon painter Andrey Rublev, it is a window into the other world. For a Renaissance artist (like Leonardo), it is a scientific discipline closely linked to other sciences, such as physics, anatomy, geology, etc. For an abstract expressionist Jackson Pollock, an opportunity for self-expression. The number of such answers, each one of them representing an individual or collective model of art, could, of course, be substantially extended." Cupidon Group, in turn, offers its own artistic model, which exists as a unity of its members' individual models.

The exhibition hall at Skaryatinsky Pereulok features Victor Skersis' works dating from different periods. These represent his classical objects of the late 1970s – early 1980s, as well as paintings and photographs from different years. The artist felt it to be especially important that the works now appear together: his earlier and later art is based on different principles, which turns the installation as a whole into a dialogue of artistic models in the context of his individual oeuvre. In the exhibition hall at Mytnaya Ulitsa, on the other hand, we witness a dialogue between the artistic models of all the group members. In this way, the project 'Show and Tell. Artist and His Model' represents a kind of an exhibition diptych and provides a view into the world of individual-cum-collective type of an artistic activity "perceived as a dialogue and a competition of different models of art." Each participant of such a dialogue utters "his own words", but none of them knows in advance where the "conversation" will lead them in the end.

The resulting product is an installation where each individual system interacts with other systems in an unpredictable way, transforming itself, much like a theme in a jazz improvisation. Textual pieces by Yuri Albert, dealing, as always, with his own oeuvre, act as a backdrop to Victor Skersis' monumental "confessionary cabins". The cabins are placed along the edge of the "infernal pool" by Andrey Filippov (a homage to the Water Lilies cycle by Claude Monet, his last work before his death). The latter piece creates an association with the three coffins appearing in the exhibition hall's showcase, another work by Yuri Albert (Who’s Afraid of Red, Yellow and Blue?) citing masterpieces by Alexander Rodchenko, Barnett Newman, etc.

Albert, Skersis and Filippov belong to the Moscow conceptualist school. This artistic movement constituted a core of the Soviet unofficial art in the 1970s-early 1990s. While in the 1990s-2000s conceptualism gave way to new aesthetic trends on the Moscow art scene, the most recent period has seen an extremely interesting phenomenon of its renaissance, with the Cupidon group (whose inception, in strictly formal terms, could be dated to 2008) taking the active part in this process. The comeback of the movement's veterans to the Moscow scene is going in parallel with renewed interest in conceptualist practices appearing in the oeuvre of the last generation of Russian artists.